The UN-brokered ceasefire deal is a first major attempt to avert more bloodshed in the Red Sea port city, a vital lifeline for millions of people. Around 70 percent of humanitarian aid goes through the port.

A ceasefire took effect in Yemen's flashpoint city of Hudaida on Tuesday morning but sporadic clashes were reported minutes after the UN-brokered shaky truce, a pro-government official said.

The official told AFP news agency that sporadic clashes in the east of the Red Sea port city are ongoing despite a truce deal.

However, Anadolu Agency quoting a military source in the Yemeni government, said the 15-minute fighting between Houthi rebels and armed groups loyal to the Saudi-backed government stopped four minutes before the ceasefire, followed by a calm situation.

The ceasefire came into effect at 2100 GMT, Saudi and Houthi media reported.

The deal announced on Thursday between the warring sides included an "immediate ceasefire" in Hudaida, whose Red Sea port serves as a crucial gateway for humanitarian aid.

An official in the Saudi-led coalition said that details on implementing the truce deal "were not clear at the beginning".

The coalition "has no intention of violating the agreement... unless the Houthis violate and dishonour it," the official said, speaking on condition of anonymity.

Residents in Hudaida and the surrounding areas have reported fierce fighting and air strikes in recent days.

At least 29 fighters, including 22 Houthi rebels, were killed on Saturday night in the province, a pro-government military source told AFP.

Two Hudaida residents reached by telephone told AFP that they could hear intermittent clashes to the east and south of the city on Monday.

A pro-government military official said that there were sporadic clashes, adding that a fire erupted in one of the factories in the east of the city due to strikes on Sunday night.

Doctors Without Borders (MSF) voiced alarm about "the continuous fighting" in the area.

The medical aid group said its teams on the ground were treating victims of gunshots, shelling and air strikes, urging warring parties "to respect the presence of civilians and health infrastructures".

UN envoy Martin Griffiths said on Sunday that the UN was working with both sides to ensure the ceasefire accord was "implemented timely and properly".

The truce is supposed to be followed by the withdrawal of fighters from Hudaida.

A prisoner swap involving some 15,000 detainees is planned and a "mutual understanding" was reached to facilitate aid deliveries to Yemen's third city Taiz – under the control of loyalists but besieged by rebels.

The two sides also agreed to meet again in late January for more talks to define the framework for negotiations on a comprehensive peace settlement.

The coalition official told AFP that the agreement stipulated the rebels should withdraw from all ports in Hudaida by midnight on December 31 and that both pro-government forces and Houthis pull out of the city completely by midnight on January 7.

Impoverished Yemen has been mired in fighting between the Houthi rebels and troops loyal to President Abd Rabbu Mansour Hadi since 2014.

The war escalated in 2015 when a Saudi-led military coalition stepped in on the government's side.

The conflict has since killed nearly 10,000 people, according to the World Health Organization. But some rights groups believe the toll to be far higher.

UN chief Antonio Guterres warned on Sunday that "much worse" lay in store for the impoverished country in 2019 unless its warring parties strike a peace deal and head off a humanitarian crisis.

Severe food shortages mean that a high number of Yemenis have been dying in "very dramatic circumstances", Guterres told a news conference in Doha. 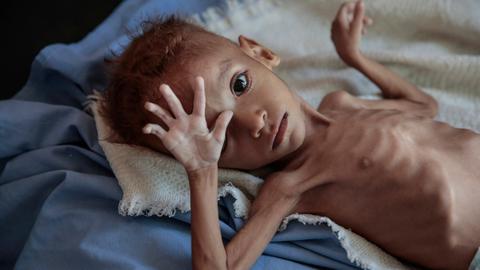