For Tel Aviv, any agreement on border definition could mean limiting its expansion as the US prepares to release the so-called 'deal of the century' document.

Known as the "deal of the century", the US is about to present a draft peace plan between Israel and Palestine, which has been delayed multiple times in the past two years.

But it's hard to tell what Israel wants, despite the US having engaged with Israeli officials since 2018. The ambiguity over Israel's endgame makes it unreliable and raises doubts about whether it wants a long-lasting peace or to continue with its iron-fisted approach towards Palestinians.

For Antony Loewenstein, a Jerusalem-based independent journalist, author and filmmaker, it has been a calculated political strategy to allow Israel’s expansion.

“What Israel wants is very clear: A green light to do whatever it wants to continue to expand settlements, even more, to possibly annex the Jordan Valley,” Loewenstein tells TRT World.

“Israel never wants to define its borders. That's been a policy for decades because if you start defining your borders and that means it cannot occupy or settle areas beyond that border,” he says.

The conflict regarding borders first began in 1948, when the Israeli state was founded after a war that resulted in its forces driving at least 750,000 Palestinians from their homes and killing around 15,000 in a series of mass atrocities. At the end of the war, Israel gained 78 percent of historic Palestine as Jordan took over the West Bank and Egypt invaded the Gaza Strip.

In 1967, Israel occupied the rest of the Palestinian territories, including the West Bank along with East Jerusalem and the Gaza Strip. The Israeli government has been building ever-expanding Jewish settlements in Palestinian lands ever since, issuing thousands of housing permits in occupied lands.

Amidst perpetual Israeli aggression, Palestinian leadership has been clear on its peace plan--that it's willing to accept the pre-1967 borders with East Jerusalem as the capital of the Palestinian state.

Despite the fact the draft deal has not yet been disclosed, unlike Israel, the US has been increasingly clear on its policy regarding the conflict.

According to The Associated Press, Jewish settlement construction in Israeli-annexed east Jerusalem has spiked since Trump took office in 2017.

In 2017, in a controversial move, Trump announced recognising Jerusalem as the capital of Israel and said the US would move its embassy there despite the fact that Israeli control of East Jerusalem is not internationally recognised.

A UN resolution adopted in June 30 1980, the year when Israel effectively annexed East Jerusalem, states that all measures altering the status of Jerusalem were “null and void” and to be rescinded. It also reaffirms the “overriding necessity for ending the prolonged occupation of Arab territories occupied by Israel since 1967”.

While openly standing against a longstanding international consensus that “the city’s fate should be decided in negotiations”, many argue that the US has paved the way for Israel’s aggressive policies.

There has been no official meeting between Jared Kushner, Trump’s son-in-law and the Middle East advisor who was tasked with finding an agreement to the conflict, and official Palestinian figures. Despite not being invited to any talks, however, the Palestinians have been clear on their demands: 1967 lines to be drawn as the border of a Palestinian state, and for East Jerusalem remain their capital.

For Loewenstein, the lack of Palestinian participation shows that the US is “simply putting on paper the practices that everyone knows has been happening for decades” while Israel is keeping the ambiguity regarding its territory to keep it continually open and evolving.

Israel is currently moving ahead with plans to annex the Jordan Valley, a huge strip of the occupied West Bank -- a move unlikely to face a backlash worldwide if proposed in the US-drafted deal.

“We don't know exactly what's in the peace deal until it gets released, but the question really is in some ways is this going to make any difference anyway?” Loewenstein asks.

“Legally speaking, Israel has no right to settle in the West Bank or Jordan Valley or for that matter Gaza. But the truth is that for decades they've been occupying the West Bank and Jordan Valley and been building settlements for moving settlers and dispossessing Palestinians.” 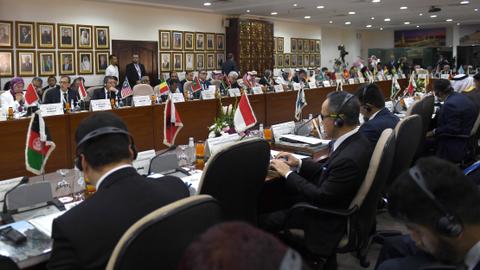