The catharsis of Hosni Mubarak's acquittal

Hosni Mubarak's freedom is legal. However, it was never supposed to be a purely judicial matter and should never have been an acceptable path to resolution after the January 2011 uprising in Egypt.

Last week Mubarak was acquitted. The day of his arrest and televised court appearance there was a sense of disbelief in Egypt. Seeing him in prison was surreal, and made the reality of the 25 January Revolution all the more palpable. Things were moving forward, and the man who had been at the helm and oversaw a 30-year period of declining standards of living, education and equality – was actually in prison.

Egyptians (and most Arabs) had become accustomed to the immunity and impunity of their dictators. After millions demonstrated, and hundreds lost their lives to transform the ruling system, seeing him in his cell facing charges, provided a more concrete sense of a "paradigm shift," which one would expect after such a social upheaval.

One of the main reasons for this was the belief that, if Mubarak only represents the tip of the iceberg of the "deep-state" filled with corrupt institutions and individuals – and a security apparatus with ultimate control – then those who continue to have power in this "deep state" wouldn't agree to the symbolic adjudication of one of their own. If the change they were making was superficial, then they would have chosen other scapegoats, perhaps the Mubarak sons and their cronies? But, this wasn't the case, leaving many to believe that Mubarak was being tried by the uprising that overthrew him. As a result, for those who sacrificed for his removal, the Mubarak trial was cathartic at the time.

Ironically, his release provides a catharsis of a very different kind, for those Egyptians that have toiled through the post-2011 period watching the methodical evisceration of the memory of the uprising – still the most significant and inspiring period for an entire generation.

Ever since the Supreme Council for the Armed Forces took over after Mubarak's ouster, and one after another, successive regimes did their part in tarnishing that period. They all played a part; whether through SCAF's use of brutal force to limit the scope of the movement, or the Muslim Brotherhood's attempts to run away with power through an asinine attempt at coalition building with old regime institutions that eventually backfired; or the the current regime's blatant contempt for 25 January.

Mubarak's continued presence in prison seemed like a meaningless pittance, especially as it was, in the end, only due to his conviction on petty corruption charges. By the time he had been acquitted, his sons – one of whom (Gamal) had been the engineer of the cohort of cronies at the heart of his regime in the 2000's – had already been free. They were engaged in a publicity campaign of sorts, appearing at football games and other public events. To top it all off, their assets were mostly liquid.

The Mubaraks, all of them, were being given a full shot at redemption, while others are still facing years in prison, or have faced much worse fates, for merely participating in protests calling for equal rights for all. The majority of these people rose to prominence as a result of the movement on 25 January, and they are blatantly being punished for their participation in it. Ahmed Doma and Alaa AbdelFattah, both face the very real prospects of spending significant chunks of their lives in prison, as two of the most vocal human rights advocates. Individuals who happen to fit the profile of being, "threats" to the regime, are also still facing long prison sentences. For some reason, NGO workers fall under that label. Aya Hegazy and her husband, Mohamed Hassanein, somehow found themselves facing years in prison for a NGO they had founded to help Cairo's street children. As a rule, activists, journalists and academics, are facing the fate Mubarak never really had to (he spent most of his detention in a plush hospital), under a regime that can do without them. The thousands that have died in 2011 and 2013 will not be allowed a shot at redemption.

Mubarak's freedom, may be legally justified. However, it was never supposed to be a purely judicial matter and should never have been an acceptable path to resolution after the January uprising.

For one, many legal experts (pro and anti-Mubarak) have been saying that unless there was a definite smoking gun and cooperative prosecutors, it would be difficult to legally tie the crimes – whether for murder or corruption – directly to the person of the ex-president. But there was never a leadership or union among the revolution strong enough to ensure that this trial was political and would symbolize the true "paradigm shift" that the revolution demanded: an end to institutional corruption and the brutality of a regime that maintains its power through an iron fist, rather than by sound democratic institutions.

Over three decades he had presided over the systematic decay of many Egyptian institutions not the least of which was education. Police brutality and corruption had existed before Mubarak, but during his time in power they had taken on new (some would argue more egregious) forms. The crimes of which he was convicted during the 18-day uprising could not have truly been expressed, much less resolved in a court of law. Attempting to do so will allow some to tie it to the very fairness of the revolutionary movement itself. If the state had allowed for a more political trial for the President's role in systematically weakening state institutions, then they would have essentially vindicated the reasons behind the revolution and the mass uprisings, something they were careful not to do at any point.

A free Mubarak, for those few who are still in denial, is a sobering dose of reality, and more importantly a declaration by the powers that be that they no longer feel the need to even pretend to respect the motives the drove millions to the streets during those fateful 18 days in 2011. The inability of civil society and political establishments to convincingly argue the reasons behind his detention or why he is in any case "guilty" should serve as a wake-up call. Much lies ahead of the opposition to form any kind of executable diplomatic force to give a voice to the millions that still would like to see more profound change. 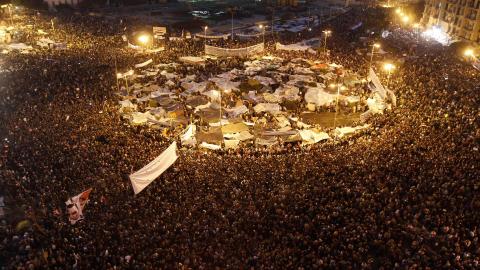 Sisi and the future of the Egyptian revolution