Bloody crack down by Sudan's military has echoes of Egyptian tactics

1
Why we need a global conversation on race
2
The future of the YPG terror group in Syria
3
Iran’s water protests reveal an impending environmental crisis
4
Emirati media rejoices as Tunisia's democracy comes under threat
5
What are the possible outcomes of the Afghanistan - Taliban conflict?

As the Transition Military Council brutalises the protest movement, it shows the ‘Deep State’ is unwilling to give up its grip on power, which could lead the country into further violence.

The military raid against protestors at the sit-in outside the Defence Ministry in Khartoum on June 3 marked the latest sign of violence and instability amid Sudan’s difficult transition. The assault by Sudanese authorities left 35 people dead and had echoes of the Egyptian military assault on Rabba in 2013, which left more than 1,000 dead and hundreds injured.

The use of brutal and lethal force to break up sit-in camps that were set up months ago is escalating tensions between Sudan’s ‘Deep State’ and the mostly unarmed, non-violent protestors who demand civilian rule.

Put simply, Sudan’s counter-revolution is in motion. But this violence waged against the protest movement was predictable, especially given how certain figures who currently run the country have much blood on their hands from past conflicts in Sudan’s periphery areas. Also, two key international factors help explain why Sudan’s Transition Military Council (TMC) is conducting itself in this manner two months after ex-president Omar Hassan al Bashir’s ousting.

First, this episode followed key meetings between Sudan’s army and its main allies in the Gulf, Saudi Arabia and the United Arab Emirates (UAE), prompting many analysts to draw comparisons with the Egyptian military’s violence against protestors in Cairo after the 2013 coup. Sudan’s military rulers recently describing the sit-in as a “danger” and the TMC’s decision to abruptly close Al Jazeera’s office in Khartoum late last month both signal a new change in tone that is likely connected to meetings with officials in Abu Dhabi, Cairo, and Riyadh.

Second, the international community’s lack of focus on Sudan also influences the tense situation. Although Western diplomats condemned the recent military assault on the sit-in, it is unclear what, if anything, will come from European and North American governments beyond rhetoric. For now, local powers that strongly support Sudan’s army are proving to have the most influence over the country’s post-Bashir transition.

Of course, what will be important to observe is the extent to which the international community writ large accepts the legitimacy of Sudan’s military coup, which the Declaration of Freedom and Change Alliance - a group of opposition factions and leaders of the protest movement - is attempting to prevent.

Will Sudan Descend into Violent Instability?

If strong support for Sudan’s TMC continues coming from Abu Dhabi, Cairo, and Riyadh and the international community avoids taking any action beyond rhetoric, the military might further brutalise the protest movement in order to intimidate demonstrators into pulling back on their demands. If the transition moves in this direction with the army using brutal force to cling on to its power and defend the entrenched interests of the clique that surrounded Bashir, Sudan risks descending into violent instability.

An all-out civil war cannot be dismissed as these clashes serve to further eliminate goodwill and potential foundations for trust between the TMC and Sudan’s protest movement.

The latest violent clash further signals the lethal breakdown in negotiations between the TMC and pro-democracy oppositionists in Sudan. Unfortunately, what has been a long-feared confrontation appears to be commencing with security forces besieging the sit-in camp in Khartoum. The TMC’s use of brutality to weaken the will of protestors will make it harder for the different players in Sudan to make concessions in order to accommodate each other. The army’s claims that this ‘interim’ period will eventually lead to civilian rule are now increasingly difficult for the protestors to accept as genuine.

With the Declaration of Freedom and Change Alliance calling for widespread disobedience and continued protest, those demanding that the TMC dissolve are clearly not afraid to continue their struggle. Yet as their passionate calls for a quick democratic transition continue growing louder, the Sudanese ‘Deep State’ is hanging on to its power while rejecting calls to allow the political arena in Khartoum to become civilian-led.

Clearly, Sudan’s post-Bashir transition has entered its second phase. The idea that the army would willingly hand over its power under pressure from protestors can now be dismissed as naive. That security forces are willing to kill unarmed protestors, especially during Ramadan, is informing the demonstrators’ understanding of how the military will conduct itself during this transition.

If the country descends into such chaotic unrest, the violence could radicalise citizens. The oppressive tactics of cynical regimes in Egypt and Syria have created self-fulfilling prophecies about violent extremists leading an opposition movement. If such lethal raids on protestors become more commonplace in Sudan, a rising death toll could leave more protestors concluding that it is naive to count on non-violent tactics and that only through violence can revolutionary change be achieved.

Under such circumstances, Egypt and the Gulf powers backing Sudan’s TMC would likely have to decide between going all out in terms of continuing to support the country’s military as it cracks down on unarmed civilians, or pushing the army’s rulers to the negotiating table with the opposition in the interests of averting a large-scale crisis that could potentially bring Sudan into a civil war.

For Saudi Arabia and the UAE, preserving ‘stability’ in Sudan via support for the TMC could become an expensive commitment. If these two GCC member-states assume the responsibility for bankrolling a military-led crackdown that could last for years and fuel lasting grievances, it would be easy to imagine anger rising against both Gulf states on the part of civilians who resist the rule of the Sudanese military rulers.

Against the backdrop of countless unresolved conflicts plaguing the Arab world, the prospects of Sudan becoming ‘the next Syria’ is deeply disturbing. 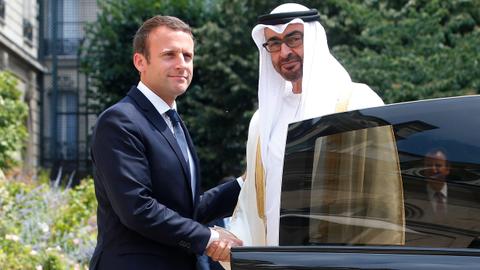 Miss Universe: A vulgar display of patriarchy and apartheid

1
Why we need a global conversation on race
2
The future of the YPG terror group in Syria
3
Iran’s water protests reveal an impending environmental crisis
4
Emirati media rejoices as Tunisia's democracy comes under threat
5
What are the possible outcomes of the Afghanistan - Taliban conflict?