For the US judiciary, corporate interests outweigh human rights

The arrest of environmental lawyer Steven Donziger is yet another example of an ongoing pattern of corporations using the US legal system to intimidate advocacy organisations and activists.

A gaping toxic wound of oil waste the size of the island of Manhattan stretches across the northern Ecuadorian Amazon, leaching cancer-causing toxins into the local waterways every day. It has been there my entire lifetime and has caused thousands of deaths while setting a horrific precedent of environmental destruction replicated elsewhere in the rainforest.

That deadly wound has created another type of damage thousands of miles away. The "infection" has spread northwards and exposed a level of US corruption and corporate criminality that shakes the foundation of the US judicial system.

From 1964-1992, Chevron (under its Texaco brand), the first oil company to drill in the Amazon, deliberately dumped over 16 billion gallons of toxic oil-drilling waters into 916 open-air unlined pits in the rainforest. Subsequent efforts by Chevron to use every means at its disposal to avoid paying for a clean-up have proven to be a dire threat to the environmental movement.

In 2011, after Indigenous and farmer communities won an epic legal victory spanning 18 years, Chevron refused to pay the $9.5 billion Ecuadorian judgement. This, despite its arguing for eight years in US courts that Ecuador was the proper venue and committing to respect its court's decision.

Two weeks before the 2011 Ecuadorian decision, Chevron filed a civil RICO suit (an anti-racketeering law created to go after the mafia) specifically designed to prevent the evidence of its admitted crimes in the Amazon from being introduced in US court.

The fact that the US judiciary, in the very same district that denied the Ecuadorians the right to seek justice, would then permit Chevron to preemptively file RICO charges preventing enforcement, reveals a fundamental lack of respect for justice in favour of corporate interests.

Chevron's retaliatory Strategic Lawsuit Against Public Participation (SLAPP suit) is lauded by the pro-corporate Americans for Tort Reform as the "new playbook to go after corporate gadflies".

The former UN Special Rapporteur on the Rights to freedom of Peaceful Assembly and of Association had already expressed her concern over a "worrying new approach" in the US of litigants using the RICO statute to "intimidate advocacy groups and activists".

This legal "kill step" strategy, so-called by Chevron's own lawyers at Gibson, Dunn & Crutcher, was meant to not only invalidate the decision of the Ecuadorian supreme court, but to vilify and eventually criminalise the Ecuadorians’ lawyers and advocates.

Steven Donziger — a key member of the Ecuadorian's legal team and currently jailed — is the ultimate example of this tactic. He is the only US lawyer ever to be held over two years on house arrest before being convicted of criminal contempt of court and sentenced to the maximum jail time.

The UN found his detention a human rights violation and demanded his immediate release and compensation. In April, members of the US Congress asked the Justice Department to drop the charges, and more are expected to send a new demand to Attorney General Merrick Garland for Donziger's release.

Chevron's RICO SLAPP suit is wholly without merit. The case hinged upon a completely unreliable witness — Alberto Guerra — who was paid over $2 million by Chevron and coached 53 days to testify. He admitted later under oath that he lied during the RICO trial to get a bigger paycheck from Chevron. His allegation of ghostwriting by Donziger has been disproven by forensic evidence. That evidence has never seen the inside of a US courtroom because the appeals court would not admit it.

The former tobacco industry lawyer-turned-federal judge who took the RICO case, Lewis Kaplan, refused pleas for a jury and oversaw a farce of a trial, referring to the Ecuadorians as "so-called plaintiffs". As renowned attorney Deepak Gupta remarked, "I have never seen a judge whose disdain for one side of the case was as palpable on the bench... it was fairly obvious that Judge Kaplan had great personal animosity for Steven Donziger."

With its RICO judgment in hand, bought with bribed testimony, Chevron continued its "long term strategy to demonize Donziger", as revealed by internal emails from 2009. Donziger and the Ecuadorians continued to pursue enforcement outside of Ecuador which presented a continued threat to Chevron. Knowing of Kaplan's disdain for Donziger, it encouraged contempt of court charges alleging he was in violation of Kaplan's decision and should be forced to surrender his privileged information — cell phone, computer, and email passwords. Kaplan obliged.

When Donziger refused and appealed, Kaplan brought criminal contempt charges. After federal prosecutors declined the case, Kaplan appointed a private firm with direct ties to Chevron to prosecute. He then violated court rules and assigned the case directly to Judge Loretta Preska, Federalist Society member, who promptly locked Donziger in his home and ultimately threw the book at him after two years of pre-trial house arrest by sentencing him to six months in federal prison saying he "needed to be hit between the eyes with a proverbial two by four."

Today, Steven Donziger sits in a crowded federal prison without ever having seen a jury of his peers. At every step of the way, the US judicial system elevated Chevron over the people of Ecuador and their advocates. The message is clear, as one Chevron representative put it: "we can't let little countries like Ecuador push around our oil companies."

But Donziger will be released. And the movement for justice in Ecuador has been reignited due to the growing shock at the abuses Donziger has endured. As US Congressmember Rashida Tlaib said at the US Capitol the day Donziger was sent to jail: "Mr. Wirth, Chevron CEO, you can't arrest all of us and you can arrest the truth. There are more of us than there are of you."

"This is a test case for corporate polluters. They think they found a path for escape justice but they've only just awoken our people." Paul Paz y Miño, Associate Director at Amazon Watch, has overseen its Clean Up Ecuador campaign since 2007. He has been a professional human rights, corporate accountability and environmental justice advocate for over 25 years. He has been Colombia Country Specialist for Amnesty International USA since 1995, served on staff at Human Rights Watch/Americas in 1995-1996, and was the Guatemala/Chiapas Program Director at the Seva Foundation for seven years. 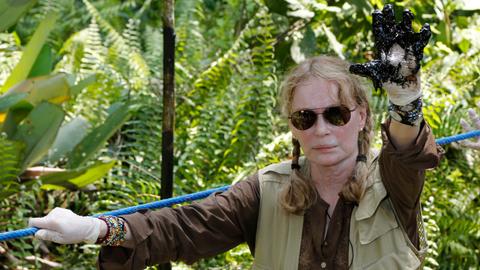