The vote for a "Constituent National Assembly", that most see as an attempt to turn the country into a dictatorship, is set for later this month. But Venezuelan President Nicolas Maduro is losing friends, and his grip on power.

More than seven million Venezuelans turned out to vote in a popular consultation organised by the main opposition party on Sunday. Its objective was to contest the election of a Constituent National Assembly scheduled by President Nicolas Maduro for July 30.

After weeks of demonstrations against Chavez's successor which already led to the deaths of at least 90 people since April, the main opposition party – the Democratic Unity Roundtable (MUD) – wanted to display its supporters as they cast their votes to reject an election aimed at shutting down the Parliament.

As the Venezuelan population swarmed the streets for more than a hundred consecutive days, the violence escalated one step further on July 5 when a pro-regime paramilitary group entered the Venezuelan parliament. The group sequestrated representatives who denounced the Supreme Court's decision to assume the powers of Parliament a "coup d'état". Parliament has been controlled by the opposition since January 2016.

After years of unrest, the country is ever closer to institutional chaos.

The release from jail of opposition leader Leopoldo Lopez – now under house arrest – did not calm demonstrators. According to the polling company Datanalisis, nearly 70% of Venezuelans are opposed to the Constituent Assembly and 80% denounce the management of the government.

If the right wing parties' standoff has been steady, Maduro is now facing increased criticism from all sides. The Catholic Church denounced the inclusion of a military dictatorship in the constitution. This statement underlines that Venezuela is no longer marked by an ideological conflict between the right and the left, but by a conflict between a clique in power and a population fighting for freedom – this resonates in a country where 80% of the population is catholic.

Even within traditional "Chavista" ranks, early supporters of Hugo Chavez have accused Nicolas Maduro of betraying the Bolivarian revolution and turning the country into a dictatorship. Moderate Chavistas would like to embody a third option, rejecting both Maduro and a MUD party who regularly failed to promote an inclusive platform that would appeal to lower classes and create the conditions for a political transition. However, they have little visibility and even less political weight.

The notable defection of the attorney general, Luisa Ortega, once a convinced "chavista", has provided additional momentum to the opposition movement.

During her tenure, she gradually distanced herself from the Maduro regime. She started to mark her dissidence last year when she published homicide statistics that had been kept secret for years to hide the spiralling violence in the country.

From her position of authority she condemned the shutting down of the parliament, turning her into a new crowd favorite in the street – although she was also responsible for placing dozens of demonstrators behind bars in recent months.

Yet Ortega's defection might prove to be the turning point for the fall of the Maduro regime and the opposition is willing to forget her pro-government past. As explained by Rodolfo Marrero, one of Leopoldo Lopez's lawyers, "every Mandela needs a De Klerk", in reference to the end of the apartheid in South Africa and the need to build consensus in a country consumed by years of conflict.

Beyond the political deadlock, Venezuela has slid from one of the most promising countries in Latin America with an educated population and impressive natural resources to a society plagued by corruption, inefficiencies and dependency.

The anger stems from the economic collapse that has triggered food shortages, medicine shortages, and an explosion in the homicide rate.

Although the country sits on the largest proven oil reserves in the world it is on the verge of bankruptcy because of a lack of reforms, endemic corruption, and criminality. The fall in oil prices since 2014 has led to the shrinking of the GDP by an estimated 18.6 percent last year and inflation reached 800 percent.

Venezuelans spend hours in food lines hoping to buy basic commodities despite rampant product shortages. The weakest citizens regularly skip meals and malnutrition has caused the death of many. A survey conducted by three universities in Venezuela attests that 75 percent of the population lost an average of at least 19 pounds in 2016 due to a lack of proper nutrition amid an economic crisis.

Maduro attributes these problems to an "economic war" fomented by the business community to destabilise his government. In a desperate bid to hold his power, he refused to organise an early presidential election and instead opted for the establishment of a future Constituent Assembly –boycotted by the opposition because it undermines the existing parliament.

In recent days the Maduro Administration has increased the pressure on civil servants to vote "without excuse" on July 30, further polarising Venezuelan society between those who have secure jobs in the state apparatus, and everyone else just trying to make ends meet looking for three square meals a day.

Yet Maduro does not have the charisma Chavez had. He's already losing support from uneducated and the poor – those once mesmerised by the chimera of an ideological and populist discourse who are now the first to suffer from the recession.

To use the result of the July 30 electoral scam boycotted by most, Maduro still hopes to keep the support of the military. The purge among officers after the failed 2002 Coup attempt against Chavez has led to the rise of a military establishment that owe their position to the Maduro regime and have benefited vastly from corruption and nepotism.

Yet as consensus starts to build between former political foes, they too will understand that the wind has resolutely shifted, and will eventually turn their back on Maduro. 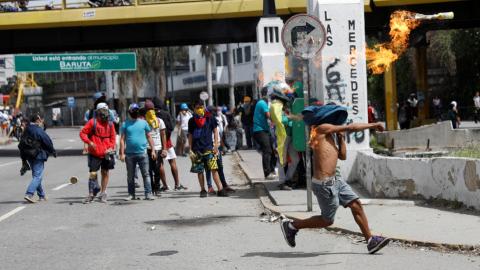 Venezuela to hold vote on constitutional changes despite Trump threats