The Supreme Court's decision to disqualify Nawaz Sharif as Prime Minister does not chart a clear path for Pakistan, or for the evolution of its democracy. So what exactly does this decision mean for Pakistan?

Politics in Pakistan is the proverbial glass of water – depending on the political perspective of the observer, it is usually a glass half full or half empty. But the judicially forced exit of Nawaz Sharif is without a doubt an inflection point in the history of the country. An era has come to an end.

The latest, and now struggling, transition to democracy in Pakistan began in 2007, when momentum grew for the ouster of then president and military dictator, General Pervez Musharraf. The two towering figures in the country's politics at the time, and for a decade and a half before Gen Musharraf's 1999 coup, were Benazir Bhutto and Nawaz Sharif.

Bhutto was assassinated weeks before the Feb 2008 election in which her party, the PPP, was considered the favourite. Her widower, Asif Zardari, went on to become president and steer the country towards a historic first: a full term of parliament.

A decade later, Bhutto's bitter political foe, Sharif, has been judicially eliminated. Sharif's brother, Shahbaz, the chief minister of Punjab, will now be tasked with emulating Zardari's feat and completing the parliamentary term, which ends in June 2018.

The glass-half-full perspective would suggest that with the exit of the elder Sharif from public office, a positive accountability precedent has been set and a political reset is possible.

While the official reason for Sharif's ouster is narrow and judicially controversial, the backdrop is much clearer.

Since the Panama Papers bombshell of April 2016, which ensnared the Sharif children and seemingly contradicted the family's version of how and when it came to own several luxury apartments in London, the Sharifs have failed to provide a credible or legally plausible explanation of their sources of income to justify ownership of their London properties.

The ouster, then, has sent a powerful signal to a previously unaccountable political elite. The two decades of civilian rule that have sandwiched the Musharraf era have failed to provide a single instance of genuine civilian-led accountability of public officials. Meanwhile, the material disparity between the poor masses and the political elite has grown.

Sharif has built a vast private estate on the outskirts of Lahore, one of the country's largest residences. Zardari has eponymously named houses in the country's major cities, the latest an oversize property that was purpose-built for the PPP boss by the country's biggest property tycoon.

For the middle class too there has been frustration: negligible reforms in a country where the government, police and judiciary are riddled with corruption; an anaemic private sector that does not create enough jobs; and an abiding sense that an entrenched political class more interested in self-enrichment is holding the country back from economic progress.

Nawaz Sharif's ouster will not automatically or necessarily turn the country's fortunes around, but it does offer a possibility of charting a different course. Future apex political leaders may need to practice a different kind of politics. And even if that is to be Sharif's younger brother in the medium term, the reputation of Shahbaz as a dynamic, policy-orientated leader offers an immediate incremental improvement on his brother's record.

The glass-half-empty perspective warns of a triple danger. The most obvious is the blow to democracy.

The premature exit of yet another prime minister has wiped out the gains from the first ever peaceful transition of power in the country. The 2013 election, lost by Zardari's PPP after a voter revolt against the party's desperate governance record and reputation for corruption, had demonstrated the power of voter accountability in a country where either military interventions or judicial ousters had pre-empted the possibility in the past.

Among the three parties that are realistic contenders for power in the 2018 – the PPP, the PML-N and Imran Khan's PTI – two will likely be preoccupied with power struggles with the courts and the military. The electoral balance may already be tipping, with an undemocratic nudge, in Imran Khan's favour.

The other danger is that the perennial civil-military imbalance—which both Zardari and Sharif tried and failed to address—will tack decisively towards the military again, allowing its priorities in the national security and foreign policy arenas to dominate.

The flip side to the argument that Sharif is manifestly corrupt and it does not matter he has been removed on a triviality is: would Sharif have been able to avoid dismissal if his relations with the military had not been so strained?

The evidence that the court relied on to dismiss Sharif was unearthed by a controversial investigation in which military intelligence representatives were specifically included. Even in the murky world of civil-military relations, it is inconceivable that two brigadier-level intelligence officers would issue such a sweeping indictment of a prime minster without the approval of military chiefs.

With Sharif now removed from power, there is no obvious civilian alternative willing to articulate a different set of national security and foreign policy priorities to the military's.

Finally, there is the danger from a particular kind of judicial activism. In 2015, to justify the creation of military courts for civilian terrorism suspects, the Supreme Court bent over backwards. Now, to find evidence of corruption against the prime minister, the court has searched eagerly.

But to protect civil liberties, political freedoms or the rights of groups that have earned the ire of the state, there has been little movement.

The permanent state's preferences have been given priority over the out-of-favour average citizen. The half-empty-glass perspective is impossible to reconcile with the half-full perspective. They may also both be true. Cyril Almeida is an assistant editor at Dawn, a Pakistani newspaper. 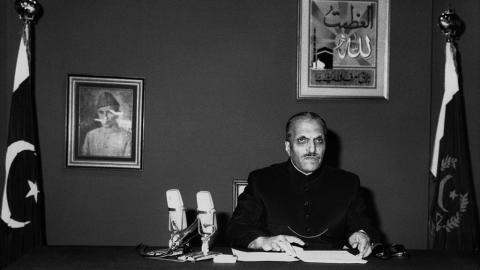 The dogged legacy of Pakistan's most destructive dictator