In the international media, Iraq is often portrayed between sectarian binaries. The reality is far more simple. Iraqis of all backgrounds suffer from corruption and nepotism, and that, more than anything, unites them.

Shamefully, much of the international media has barely covered the eruption of popular protests that have swept mainly southern Iraq over the past few weeks. Iraqis in the oil-rich south took to the streets, calling on the federal government to end corruption, institute effective policies to ensure Iraqis had gainful employment, and to put an end to foreign interference, primarily coming from Iraq’s ever troublesome neighbour to the east, Iran.

In response, the protesters have faced police brutality, and abduction at the hands of pro-Iran Shia militias who have a vested interest in crippling Iraq and making sure that it continues to be a gangland that they can milk dry.

Although popular unrest is nothing unusual in Iraq, one key factor that has emerged is that all Iraqis have the same concerns, irrespective of their ethno-sectarian background. This mere fact could be one reason why the mainstream media has attempted to sidestep the protests and failed to give the demonstrations the attention they deserve, because they prove once and for all that Iraqis are sick and tired of the sectarian nightmare that Iran exported to their country.

The Sunni, Shia or Christian, Iraqis have had enough of the militia violence and the complete and utter subservience of their political class who have failed them for 15 years, who often have served Iranian or American interests.

On the whole, the Iraqis who have bravely come out to express their outrage against a regime and system that takes much of its orders from Tehran are from the Shia demographic. That fact in itself leaves most western journalists, analysts and policymakers gobsmacked, as they have long assumed that just because Iraq is held under the thumb of pro-Iranian Shia politicians and militants, all Iraqi Shia must be broadly on the same page, differing here and there on minor issues.

What the commentators have failed to understand is that the lack of security, economic opportunity, development, education and healthcare are issues that all Iraqis feel acutely.

They also failed to understand that there is an enormous difference between the fundamentalist Shia groups and Iran-backed militia movements and the Shia Iraqis themselves. During the 1980-88 Iran-Iraq War, the Islamic Republic of Iran’s late founder, Ayatollah Ruhollah Khomeini, made the same costly mistake.

Khomeini thought that all he needed was to antagonise Iraq into a war with Iran, and the Shia of Iraq would stand with him against their own country due to his religious credentials and the authority he wielded. He was catastrophically wrong, as many hundreds of thousands of patriotic Iraqi Shia gave their lives to prevent the exportation of Khomeini’s sectarian ideology, and to protect their homeland from an Iranian invasion after the initial Iraqi incursion failed.

They did so, despite being fully aware of numerous reports that have continued from 2003 until the present day from Amnesty International, Human Rights Watch and others on the human rights violations perpetrated by the government against the Sunni Arabs. Now, however, they have been struck dumb and are unable to articulate precisely what is happening in Iraq due to the fact that it is now Shia Arabs leading the call for change.

It is telling that human rights organisations continue to report on Iraqi government violations, despite the Green Zone regime being continuously feted as a democracy by the international community and the media that peddles their discourse.

Just last week, Amnesty International reported that security forces were deliberately attacking demonstrators while access to the internet has been disabled, likely in a deliberate attempt to stifle exposure of government crimes. Again, the majority of the victims of state and militia violence are Shia Iraqis.

This is not the first time that Muttalibi has encouraged or even lauded violence, as last year during the government assault on Mosul he proudly stated to me and others on TRT World’s flagship Newsmakers program that his government executes prisoners without trial. His statements, and those of other political figures like him, just show that this disregard for human life in Iraq is old and well-evidenced.

However, all the regime is succeeding in doing is preparing the groundwork for a future revolt against them, which may be too widespread for the government to contain.

Iraqis are slowly beginning to work together at a grassroots level to reestablish their national identity away from the sectarian politics of the Green Zone elite who have profited handsomely from the pillage of Iraq since 2003. The more this national unity is consolidated amongst normal, everyday Iraqis of all backgrounds, the less likely it is that the corrupt political process will survive.

This is why the government has stood back as extreme violence is unleashed against the protesters, and this is also why ultimately the regime will fail in stifling Iraqi desires for sovereignty and national unity. 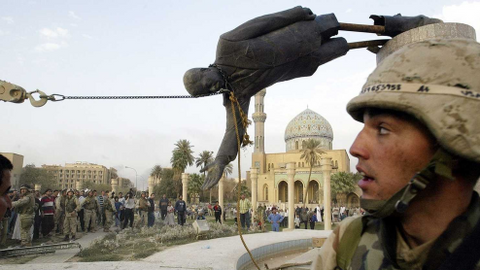 Fifteen years on: the legacy of the criminal US invasion of Iraq