The evolution of drone tactics and the future of counterterror strategies

Countries like Turkey are developing novel armed drone technologies and strategies that allow for effective and precise targeting of military objectives.

Under former President Barack Obama, the US radically increased its use of armed drones as an alternative to ground troops. Over the years, US drone tactics evolved, and other nations learned from the US and even formulated new ways of using them. Today, they have become a vital tool in counterterrorism efforts.

The most prominent area of drone usage was war-torn Afghanistan, where the US relied on Predator systems to target the Taliban and terrorist entities.

Images of Afghan civilians at a wedding killed by American drones became emblematic of their dangers and shaped perceptions of drone warfare in both Afghanistan and the world. Their use also brought a deadly consequence: The massive frustration and anger among the Afghan people helped the Taliban recruit and expand its influence.

Many human rights activists and scholars criticised the use of armed drones, and portrayed US President Obama as a drone killer.

Considering the American withdrawal from Afghanistan, one can say that US drones failed.

For every Taliban fighter who was killed, several others joined the Taliban. The use of drone strikes against the Taliban — who were heavily embedded with the local people of Afghanistan — proved to be a wrong strategy.

Over time, the Taliban grew in influence so much that the US preferred to strike a deal with them in order not to prolong the war.

However, this does not mean that the Americans have not learned from their mistakes. In contrast to Afghanistan, the US used drones in Syria to achieve limited goals with fewer risks and costs.

In Syria, the US started employing a new strategy of targeting terrorists who were not embedded with the population, and using the ‘Ninja Bomb’ — a bomb that uses six flying blades — for precise assassinations, thus reducing the risk of civilian casualties. The US also focused more on senior targets.

With this strategy, the US effectively manipulated internal dynamics in Syria’s northwest among the Al Qaeda affiliate Al Nusra by exploiting a rift within the organisation between dogmatists and the pragmatists.

While the pragmatists favoured breaking up with Al Qaeda and focusing on a local Syrian agenda, the former wanted to continue on the path of Al Qaeda.

Over time, Al Nusra broke up with Al Qaeda and united with other armed groups to create Hayat Tahrir al Sham, and dissidents remained loyal to Al Qaeda and formed Hurras al Deen.

In this period, the US drone assassinations targeted senior figures within this spectrum to manipulate the debate and exterminate more radical figures that stood their ground against the pragmatists. Due to the new technology, drone strikes reduced civilian casualties compared to Afghanistan and achieved their goal.

The US successfully facilitated the internal debate and the internal balance of power among these groups. At the moment, Hayat Tahrir al Sham remains, but networks loyal to Al Qaeda in Idlib were disbanded and went underground.

What the US did was to facilitate an already dynamic situation rather than creating one. This limited goal can be achieved via limited means and is an important experiment to be considered in counterterrorism efforts.

Other nations like Turkey have also come up with their own concepts. What Turkey has done is more comprehensive. Rather than solely relying on drones, a multi-pronged approach — consisting of drones, checkpoints and local partners — proved to be an effective tool in counterterrorism.

While the current debate about Turkish drones focuses more on their innovative use in conventional warfare, Turkey has also revolutionised their use in counterterrorism.

Similar to the US drone strikes against senior targets, Turkey has been using drones to target senior cadres of the PKK terror group in northern Iraq. Between March and July 2021 alone, Turkey killed at least 13 senior figures of the PKK.

Furthermore, Turkey has used drones in cross-border military operations in Syria against Daesh and the YPG, the Syrian offshoot of the PKK. The MAM-L munitions of Turkish drones proved to be more effective with less risk of accidentally hitting civilians and focusing on purely military targets.

More than that, Turkey combined drones with checkpoints to counter the relative advantages of guerrilla warfare. In northern Iraq, Turkey established interconnected checkpoints supported by drones to monitor and prevent PKK movements. Despite the mountainous geography, the PKK could not inflict serious attacks against Turkish soldiers.

To complete the triangle of success, Turkey found reliable partners on the ground who enjoy local support. In Syria, the Syrian Interim Government and its armed forces, the Syrian National Army, have been essential in Turkey’s strategy of clearing Afrin, Al Bab, Jarablus, Tel Abyad and Ras al Ayn from the YPG and Daesh.

In Iraq, the Kurdish Regional Government and its armed forces, the Peshmarga, play a crucial role in cutting off the PKK’s supply and preventing it from entering new areas.

The role of checkpoints and local partners is essential in the success of drones against terrorists. Success won’t come with only bombing terrorists. Without a suitable local partner, the organisations will regroup and grow.

Local partners also need to be chosen wisely. For instance, the US reliance on the YPG against Daesh is doomed to fail. For the people of Raqqa and Deir Ezzor, the YPG is an alien group. Therefore, one cannot expect Daesh to be exterminated in Syria unless the US abandons the YPG and finds local partners that are acceptable to the local people. 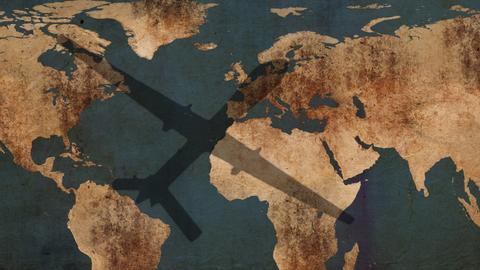