1
Remote work will be a game changer for the developing world
2
Iraqi elections have ended the PKK’s propaganda campaign in Sinjar
3
Austria's Sebastian Kurz is out, but his right-wing policies remain
4
Breakdown in China-India talks are a ‘grim portent’ for the region
5
Will the F-16 crisis be a setback for Turkey–US relations?

The statistics are dire, even with resettled refugees not included. We are living in a time in history when 42,500 people are forcibly displaced from their homes, every day

In today's toxic political environment, refugees have been given a bad name. They have been reduced to pawns as politicians try to score points and win elections. But International Refugee Day, celebrated for the 16th year with worldwide events on June 20, is the perfect time to draw attention, not only to the plight of refugees and internally displaced persons, but also to their resilience and courage.

It is not a new challenge. For the Roman Catholic Church, this tradition dates back to 1941 when Pope Pius X instituted World Day of Migrants and Refugees, celebrated annually in January. But it is one that continues.

The statistics are dire, even with resettled refugees not included. We are living in a time in history when 42,500 people are forcibly displaced from their homes, every day.

To date, the UN Refugee Agency (UNHCR) estimates, 65.3 million people around the world fall into this category. About 51 percent of refugees are under the age of 18, the highest number of child refugees since World War II.

Additionally, more than 5 million Palestinians have been recognised as the largest group of refugees in the world by the UN but were excluded from the UNHCR estimates since they are under the jurisdiction of the United Nations Relief and Works Agency.

As someone who has worked in the humanitarian community for the last few years, I cannot help but reflect on three things.

First, though refugee crises are very complex and multifaceted we cannot ignore the fact that Western powers are directly or indirectly at the root of many conflicts – by creating dictatorships and undermining democratic governments for geopolitical interests and the pillaging of natural resources.

For example, in the Democratic Republic of Congo (DRC, formerly known as Zaire), the US in 1967 with the assistance of the CIA propped up the dictator Mobutu Sese Soko. They then continued to prolong his rule for three decades by providing more than $400 million in weapons and military training, which was used to repress his own people.

Once Laurent Kabila's forces in 1997 overthrew Mobutu, the US chose to officially back the new government under growing reports of unrest and ethnic hatred. It did this without questioning how military aid to such a regime would lead to democracy under Kabila after it had already failed under Mobutu.

Before long, a civil war broke out (1998-2003), one of the deadliest conflicts since World War II, with nine other African countries pulled into the conflict. To its credit during the early months of the war, the US did lead on diplomatic efforts but had also by this point trained troops on both sides of the DRC's civil war at a time when close to 2 million people were being displaced from their homes. When all the fighting subsided, there were an estimated 495,724 refugees.

Regrettably, this behaviour by Western powers is not unusual. All through the Cold War, the U.S. seeking an advantage over the Soviet Union and its allies, was engaged in delivering weaponry to African States worth $1.5 billion. The result, their top recipients -- Liberia, Somalia, Sudan and DRC – also topped the list for violence, instability and economic collapse in the region. The US is not even the top-ranked supplier of arms to African countries with poor human rights records. It comes in sixth, with China, supplier of ammunition to Sudan used in the Darfur genocide by security forces and government-backed militia groups, leading the pack.

Second, despite its role in various conflicts, it is not the Western countries that host the largest refugee populations. In fact, 86 percent of the world's refugees are hosted by developing countries, with Lebanon, Pakistan and Turkey leading the way as of mid-2016. Dadaab, the world's largest refugee camp with more than 329,000 people, is located in my home country of Kenya. This is partly a result of geography, with most wanting to stay as close to their home countries as they can.

As hauntingly narrated in her poem "Home," Warsan Shire, a Somali-British author writes:

...you have to understand,
that no one puts their children in a boat
unless the water is safer than the land

Refugees bring with them skills and knowledge. When they are in countries that have people-centric policies, they tend to create positive-income spillovers.

Illustrations of this are numerous: Tateh Lehib Breica, a refugee living in an Algerian camp, is building more durable homes out of sand-filled plastic bottles to withstand the consequences of climate change; refugees in Guinea, introduced swampland rice, allowing use of previously unused land and refugees, and in Nepal refugees integrated new agriculture techniques for growing cardamom, a valuable cash crop in the region.

Third, I want to celebrate the spirit of my friends and colleagues currently walking alongside the 98.2 million crisis-affected people. To you, I share the encouraging words of Pope Francis as he marked the World Day of Migrants and Refugees, at the beginning of the year: "I entrust all child migrants, their families, their communities, and you who are close to them, to the protection of the Holy Family of Nazareth; may they watch over and accompany each one on their journey."

This International Refugee Day, as our thoughts are with those fleeing their homes and those working alongside them, it is time we let global leaders know that our foreign policies should work for peace around the world. Playing politics for monetary and strategic gain tears families apart, robs children of their childhood, destroys the fabric of communities, and endangers the most vulnerable among us. The burden falls most heavily on those who could be the world's most productive assets.

Be part of the change join the #WithRefugees movement. Uzma Alam PhD, MPH, is a global health practitioner and a participant in the Allies for Reaching Community Health Equity Public Voices Fellowship with The OpEd Project. 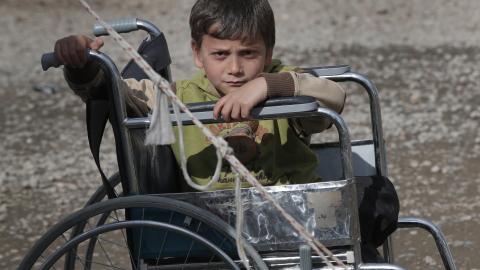 1
Remote work will be a game changer for the developing world
2
Iraqi elections have ended the PKK’s propaganda campaign in Sinjar
3
Austria's Sebastian Kurz is out, but his right-wing policies remain
4
Breakdown in China-India talks are a ‘grim portent’ for the region
5
Will the F-16 crisis be a setback for Turkey–US relations?