The West is underestimating Turkey’s united front over national defence

1
Is the US right in wanting to leave the Open Skies treaty?
2
The fate of multilateralism after the pandemic
3
South Africa and Covid-19: A transformative opportunity
4
Mahmoud Abbas's declaration fails to make an impact - and it's his fault
5
The Covid-19 pandemic further divides the US

The EU and US are misinterpreting Turkey’s actions as a whim of President Erdogan, but buying the S-400 missile defence system and drilling for oil in the eastern Mediterranean are supported across the political spectrum.

Turkey is in the midst of juggling several major foreign and security policy issues, including the purchase of S-400 anti-aircraft weapon system, drilling activities in the eastern Mediterranean and the fight against terrorism.

Turkey has begun to receive components of the S-400 missile system from Russia. By July 18, 17 cargo planes had arrived at Murted Air Base in the capital Ankara. Besides that, the Turkish Armed Forces are continuing military operations in the north of Iraq and protecting Turkish drilling activities in the eastern Mediterranean.

However, Turkey’s attempts to protect its national interests are being challenged by a series of potentially looming sanctions by the US and EU.

Both the EU and the US have declared sanctions against Turkey and have indicated that further measures are underway. While policymakers continue to misinterpret Turkish activities as ‘Erdogan’s choice’, Turkish political parties have presented a united front.

If the West can’t overcome its psychological obstacle in associating everything in Turkey to President Recep Tayyip Erdogan, the two sides may drift further apart.

In recent weeks, the EU has responded to the demands of Greek Cypriots and Greece to declare sanctions on Turkey over its drilling activities around Cyprus, which is divided between Turkish and Greek Cypriots.

EU foreign ministers decided to reduce the pre-accession assistance to Turkey for 2020 by €145.8 million, suspended negotiations on an aviation agreement, halted high-level bilateral talks and invited the European Investment Bank to review its lending activities in Turkey, which totalled €358.8 million last year.

Serving as reinforcement for the distrust Turks have towards the West, the EU declared its sanctions on the third anniversary of the attempted Turkish coup on July 15.

Meanwhile, the US has suspended Turkey from the F-35 fighter jet programme over the purchase of the Russian S-400 air defence systems. The suspension of Turkey not only includes stopping the delivery of more than 100 F-35s, which Turkey was set to purchase but also the suspension of 10 different Turkish firms from the supply chain of F-35 production.

Additionally, the administration of US President Donald Trump has made it clear it is looking into the Countering America’s Adversaries Through Sanctions Act (CAATSA) and has not decided yet which five of the 12 listed sanctions the US will impose on Turkey over the purchase of the S-400 air defence systems.

During the process to acquire the S-400 systems, the Turkish political parties have shown a united front. In addition to the governing AK Party, the nationalist MHP has repeatedly argued that the purchase of the S-400 systems is necessary.

Later on, Kemal Kilicdaroglu, the head of the main opposition CHP, said: "If Turkey's past desire to purchase Patriots [US-made missile defence systems] was not met, of course, it would pursue other options to ensure its security."

The opposition IYI Party’s head Meral Akşener declared her party’s stance on the purchase of the S-400 by saying that it stood by Turkey and supported the decision.

In regards to Turkish drilling activities around the island of Cyprus, the Turkish political spectrum has again presented a united front.

The four parties; the AK Party, CHP, IYI and MHP, signed a joint statement in the Turkish Parliament opposing the EU sanctions and supporting Turkey’s activities in line with the country’s national interest.

Followers of Turkish politics know that the political debates in Turkey are highly heated, and Turkey’s political parties disagree on many points.

Many aspects of Turkey’s foreign policy, such as its stance on the government of Egypt, which overthrew the democratically elected leader in a coup, have been heavily criticised by the Turkish opposition. However, in both of these cases, the West seems unable or unwilling to understand that these are decisions made by a democracy and in the national interest.

For instance, the situation in Cyprus is a shared national concern. Turkey’s intervention in 1974 on the island to protect the lives of Turkish Cypriots was agreed by the government and opposition together, and the era of sanctions which followed has been remembered with pride in Turkey across the political parties. Now, the Greek Cypriots are attempting to exclude Turkish Cypriots from the expected revenues of the gas reserves around the island, but Turkey is ready to protect the rights of the Turkish Cypriots.

Many commentators are labelling Turkish drilling activities in the eastern Mediterranean and the purchase of the Russian S-400 air defence systems as Erdogan’s personal choices in an attempt to frame Turkish national interests as the whims of one man. This could not be further from the truth.

This perspective sees Turkey via their view of Erdogan. Yet this misinterpretation could be a result of the West’s extreme focus on Erdogan over the course of the recent years and has the potential to fuel tensions with Turkey.

If the West continues to associate Turkey’s national decisions with Erdogan alone, it won’t try to address Turkey’s national interests and could make the mistake of thinking that hurting Turkey with sanctions will help to boost the opposition against Turkey in order to change the behaviour of Erdogan or to change him directly.

This psychological obstacle of the West to understand Turkey promises a further escalation in tensions and could ultimately result in both sides drifting apart further and risking the security alliance of NATO’s southern flank. 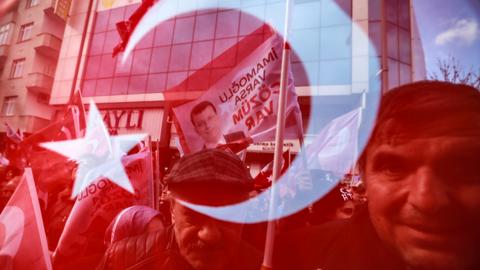 Will God 'punish us' if we don't make Russian an official language?

The fate of multilateralism after the pandemic

1
Is the US right in wanting to leave the Open Skies treaty?
2
The fate of multilateralism after the pandemic
3
South Africa and Covid-19: A transformative opportunity
4
Mahmoud Abbas's declaration fails to make an impact - and it's his fault
5
The Covid-19 pandemic further divides the US