Western strikes on Syria are nothing more than theatrics

1
Mahmoud Abbas's declaration fails to make an impact - and it's his fault
2
South Africa and Covid-19: A transformative opportunity
3
The fate of multilateralism after the pandemic
4
Is there an active role for NATO in the Libya conflict?
5
A batty solution? The potential vaccine for future outbreaks

Striking the Syrian regime for the chemical attack in Douma has come too little, too late, and is not likely to deter the Assad regime or Russia. Worse still, a Trump-Bolton White House inspires little confidence in any large scale US intervention.

In the early hours of this morning, the United States, United Kingdom and France launched air and missile strikes against Syrian chemical weapons facilities.

The tripartite attack targeted one site in Damascus and two near Homs, and was in response to the horrific chemical weapons attack in Douma last week that killed dozens of civilians, including many children.

Unfortunately, however, the reality is that these attacks do not go anywhere near far enough to deter the senseless killing of Syrian civilians, which leads to the accusation that this attack has nothing to do with protecting Syrian lives and everything to do with political grandstanding.

To be clear, there is absolutely no reason why punitive action against the regime of Bashar al Assad could not have been taken much sooner. After all, whenever the US or its allies want to strike the so-called Islamic State (Daesh), or ISIS, terrorist targets, they are able to do so at extremely short notice.

The US-led coalition already has significant military assets in the region, and could have conducted a strike against the targets they hit this morning within 24 hours of the Douma chemical weapons massacre.

Instead, they decided to wait for an entire week, including setting the stage with several diplomatic attempts to set up an independent investigation into the attack at the United Nations that were doomed to fail, while US President Donald Trump unleashed a series of tweets threatening military action while simultaneously reaching out to Russia.

The media reached fever pitch in anticipation, with analysts and pundits weighing in on Twitter and Facebook, some pushing for intervention while others urged a more cautious approach.

All that anticipation was pretty much for nought, though, as the sites that were attacked were evacuated after Moscow used the time and the target list Washington provided to tip Assad regime officials off.

A regime official told Reuters “we have absorbed the strike” while the official Twitter account of the Syrian presidency released footage of Assad swanning into work for a prompt 9AM start – just another day in the office for a mass murderer who is clearly undeterred and will continue killing his people.

The build-up to this minor intervention and the attack itself has all the hallmarks of a political stunt. At home, Trump faces serious questions about the extent he and members of his administration colluded with Russian President Vladimir Putin to win the 2016 US elections.

After such harsh rhetoric towards Russia as well as these strikes, Trump can now argue that he simply could not have colluded with Moscow only to bomb its interests in Syria.

Meanwhile, his British ally, Prime Minister Theresa May, has been captaining a sinking ship since the Brexit vote, and is keen to appear strong and decisive, especially since the suspected Russian nerve agent attack on defector Sergei Skripal in Salisbury last month. Indeed, her speech explaining British involvement in the strikes on Syria this morning makes a pointed reference to that episode.

Interventionism vs the agency of the Syrian people

Of course, it is highly understandable why many would be pushing for a western intervention in Syria. After all, Assad has overseen leadership of one of the bloodiest, most brutal and traumatising civil wars in recent memory, leaving more than half a million dead and millions more displaced and scattered around the world. His complete disregard for human life is on a par with Daesh terrorists, and his Iranian and Russian backers are no different.

However, we need to take a look at the people who we are asking to intervene and topple the regime.

Trump is already well-known for his bigoted, anti-Muslim views. His new national security adviser, John Bolton, is the kind of man who still touts the illegal 2003 invasion of Iraq as a success story. If Bolton thinks Iraq – which is now dominated and controlled by his supposed enemy, Iran – is a success story, do we really want that kind of model replicated in Syria? I, for one, don’t think so.

Any solution and intervention that does not take into account the Syrian revolutionaries who started this drive to topple the Baathist dictatorship in 2011 will clearly not be an intervention made in the interests of the Syrian people.

After all, can it really be said that Trump, or even Obama before him, genuinely care about the fate of the Syrians under Assad? Of course not, otherwise they would have taken concerted steps to ground the regime’s air force, provide air defences to liberated cities (many of which have now been reconquered by Assad), and not allowed the revolution to get derailed by the Daesh threat.

As depraved and as savage as Daesh is, they are not deadlier or more dangerous than Assad and the legions of Shia militias who fight at Iran’s behest.

As it stands, this latest military strike will do nothing and was entirely futile as far as the Syrian people were concerned. The difference between gassing hundreds to death or blowing them to smithereens through the use of barrel bombs, cluster munitions and other munitions is minimal, as the end result is the same – a never-ending river of innocent Syrian blood.

The fate of multilateralism after the pandemic 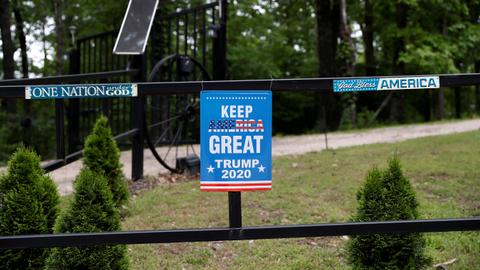 The Covid-19 pandemic further divides the US

1
Mahmoud Abbas's declaration fails to make an impact - and it's his fault
2
South Africa and Covid-19: A transformative opportunity
3
The fate of multilateralism after the pandemic
4
Is there an active role for NATO in the Libya conflict?
5
A batty solution? The potential vaccine for future outbreaks