The late president slipped away without leaving a strong political legacy, with his allies seemingly the first to move on and his party fragmented into five.

When we were children, our elders would say that former president Habib Ben Ali Bourguiba’s death would be the day of judgement for Tunisia, or alternatively, it would be when the Earth ceased to spin. We lived on, and saw the end of Bourguiba, and the earth continued to revolve until Beji Caid Essebsi arrived as president.

Then he passed away, and no one mentioned his end in relation to the end of the world. Some however, worked tirelessly to have Tunisians believe that the deceased kept the sky from falling down.

But here we are, praying for mercy for his soul, and thinking of the political future without him.

People have realised that their fate is not in the hands of one person or chief, and this is one of the first benefits of democracy, in that it frees the mind. But even in prevailing tranquility, there is a natural need for death to reshuffle the Tunisian house. Here are some expectations on what could happen next.

Essebsi’s inheritance carved up by his allies

Essebsi did not leave behind an institutional legacy beyond what he left to his son in the Nidaa party. During the years of his rule, the very party that brought him to power fell apart. The capacity for fragmentation itself was inherent since its founding, and was no surprise to anyone when it did happen.

The cultural Left, who had practically founded the party also withdrew, for the reason that Essebsi did not accept the waging of a war against the Islamists. This was a war that the Left sought avidly, from Ben Ali’s camp to French leftists.

Essebsi would than raise his distant relation Youssef Chahed to the post of Prime Minister, who would turn against him and take with him a significant deputy bloc, founding his own parallel party that would weaken Essebsi and the Nidaa party.

The remainder would merge with Nidaa, bringing together the two schisms of Monastir and Hamammet’s Nidaa. Essebsi’s final days were devoid of any party, while Tunisians hoped the man would live long enough to complete his term without affecting election dates. But God willed otherwise.

The groups and lobbies that founded Nidaa Tounes are over, having fragmented into more than five parties, each claiming Bourguiba’s legacy. None have iconised Essebsi, as if his very allies were the first to erase his political impact.

Nidaa’s votes are its chief political capital, and will see in-fighting and outright friction between every schism that seeks to inherit Bourguiba’s legacy.

To this end, the Collectivists, French Left, and those anxious to counter Islamic parties will look for a political voting refuge. Battles will take place to win them over throughout the next two months in a contest to win the majority of their votes.

How will Tunis do after the passing of Essebsi? The answer will be revealed after this struggle. Presently, it seems that Youssef Chahed and his party (Long Live Tunis) are most likely to win the largest share of Nidaa votes, in addition to asserting control over its traditional rural voter bases.

In the post-Essebsi political scene, Chahed stands to gain the most from the end of his rule. Even Essebsi’s son lost the protections he enjoyed within and without the party, and may very well find himself contesting opponents (or enemies) in courts.

Essebsi did not politically insure his family even up until his death due to his son’s failures and disappointments, and through no lack of effort by his late father.

Vacuum around Ennahda allows for it to grow

With the Nidaa party fallen into disrepair, the Ennahda party established itself as the foremost party with virtually no opposition. Most of the political manoeuvring in Tunis took place to exceed rival’s standings.

Essebsi’s personality was appealing to many who left Ennahda. Since his passing, the appeal has disappeared entirely, with no appeasing alternatives left to dissidents from within the party. Many will return to Ennahda’s fold, or make peace with it.

Ennahda is a stable bastion of power after Essebsi. If it were not for the fact this death cannot be compared to the liberation of Makkah, Ennahda would have been described as the House of Abu Sufyan, where amnesty was given to all those who once opposed the rise of Islam.

Meanwhile, Ennahda seeks out votes and the largest possible electorate; to protect against the harms of Ben Ali and the Left. In this, we find the resounding principle, “Whoever is not with me, is not necessarily against me”.

In this manner, Ennahda extends itself by vote, and grows politically. Slowly but surely, apprehensions about integration will fade incrementally, while the rhetoric calling for the removal of Islamists will lessen. This will culminate in the political attitude of “if you have a problem, look for its solution with Ennahda”.

This represents the highest form of political expansion during a transitional period where the country struggles economically, with no solution to be found. But throughout these transitional circumstances dependent on political consensus, the Ennadha party no longer has a partner to rely on.

Everyone is well aware of the level of coordination that took place between Essebsi and Ghannouchi until the summer of 2018 (when Ghannouchi refused to dismiss Chahed). Who will Ghannouchi negotiate with to ensure a second democratic transition?

Ghannouchi’s political rhetoric ends with the fact that the transition needs consensus, and not single party rule, no matter its accrued wealth of votes. For this reason, Ghannouchi is looking for a partner with none to be found. More critically, we can expect him to be exposed to significant political extortion to form a government of consensus after elections.

Who’s the next president?

It is certain that Tunisia’s next President will be a civilian, and not a military figure; and that they will reach the stand through elections. Tunisia is a country that has no love for military coups.

In past years when Essebsi’s allies would discuss his renomination, many were hesitant to be nominated against him and conscious of the high probability of their loss if they did. With the prime contender out of the picture, the road to nomination is cleared. Tunisia’s next election will see many candidates, but Ennadha’s victory is all but assured.

Ennahda, prior to and after Essebsi, has some of the keys to Carthage, even if a nominee is not chosen from its ranks. The dilemma now is that the presidential podium can be won by a candidate with no party representation in the parliament. Ennadha’s negotiators may possibly end up trading the government for the presidency, which would deal a heavy blow to Ennadha with the advanced presidential election date from November to September.

Another difficulty along its path will be found in forming a government, and in the manner of Ennahdi’s expansion throughout state institutions, though parliament deputies have yet to address this.

A president without parliamentary representation will face major legislative obstacles. This is one battleground where a political conflict may take place.

It will not be possible for a president limited in authority by parliament to make full use of their legislative initiative. They may even end up sending drafts for laws, that are shelved never to see the parliament’s floor.

Moreover, such a president would be largely unable to make any changes to the constitution to expand the president’s executive authorities, as Essebsi did. To Tunisians, this has come to resemble the threat of a military coup.

In a two-round presidential election however, Ennahda’s negotiations may still be able to reshuffle the cards they are dealt, and to continue to play. On September 15 2019, the incoming president will be announced, leading to the rebuilding of our expectations on what is to come after. Until then, we are witness to a seamless transition of power, and angry lovers of the military’s boots. May God have mercy on an Arab leader who dies a natural death. 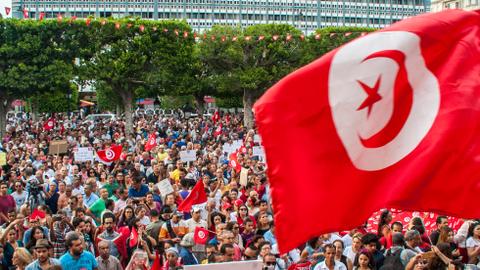