Wenger has been barracked by his own fans and failed to secure Champions League qualification for the first time in 20 years, but he ends the season by surpassing Aston Villa's George Ramsey as the FA Cup's greatest manager.

Alexis Sanchez's early opener for Arsenal, allowed to stand despite an apparent handball, was cancelled out by Diego Costa, only for Ramsey to reply immediately with the second FA Cup-winning goal of his career.

Arsenal, plagued by defensive selection issues, claimed a third FA Cup win in four seasons and 13th in total, making them the outright most successful team in the competition's history ahead of Manchester United.

Antonio Conte's Chelsea, who had Victor Moses sent off after he received a second booking for diving, were thwarted in their attempt to complete a Premier League and FA Cup Double for the second time.

It meant no glorious farewell for departing skipper John Terry, who will bow out on 717 appearances and 17 major honours after spending the match on the bench.

Victory was rich vindication for Wenger, whose Arsenal future is due to be decided by a board meeting in the coming days, and allowed him to salvage something from the most difficult season of his 21-year tenure.

He is reported to have been offered a two-year contract and while dissent against him has mounted this season, the stirring nature of his side's win will surely have won back some of his team's disgruntled fans.

The Frenchman's team took a fourth-minute lead with a goal that will be debated long after the final whistle.

After blocking N'Golo Kante's attempted clearance on the edge of Chelsea's box, Sanchez ran through to skewer a shot past Thibaut Courtois, only for an offside flag to be raised against Ramsey. 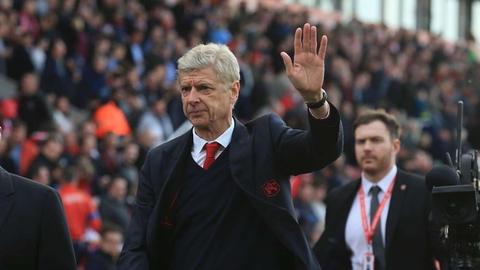