Clayton Kershaw, striking out 11 over seven innings and allowing just three hits, gave the Dodgers a 1-0 lead in the best-of-seven series.

The Los Angeles Dodgers, bolstered by a brilliant outing from pitcher Clayton Kershaw and a two-run blast from Justin Turner, beat the Houston Astros 3-1 to draw first blood in the World Series on Tuesday.

Kershaw, striking out 11 over seven innings and allowing just three hits gave the Dodgers a 1-0 lead in the best-of-seven series.

“I felt good. It was hot tonight, so warming up, it didn’t take long to get loose,” the three-time NL Cy Young Award winner said after his first World Series start.

Y’all have been waiting 29 years for this @Dodgers fans!!! Keep bringing that electricity tomorrow night!!! pic.twitter.com/N4u44zZ7v2

It was a scorching 39.4 C when the towering lefty threw out the first pitch of the game a little after 5 pm local time (0100 GMT).

Astros pitcher Dallas Keuchel had a more difficult start after Dodgers leadoff man Chris Taylor put his first offering of the game into the left-field stands for a quick 1-0 lead.

It's nothing personal, JT does this to everybody. #WorldSeries pic.twitter.com/nBOgZ9Sxsi

Keuchel quickly settled down, and the game turned into a fast-moving pitcher’s duel after Astros third baseman Alex Bregman tied the game 1-1 in the fourth with a solo shot to left.

But Turner’s two-out, two-run homer in the sixth was the difference and the Astros lineup, which has struggled on the road all postseason long, never threatened again.

Dodgers reliever Brandon Morrow threw a perfect eighth and closer Kenley Jansen did the same in the ninth.

Turner’s home run gave him 26 RBIs for the postseason, a new Dodgers record and something the third baseman said he could barely process given the players who have come before him.

“I feel extremely proud to be able to put on the same uniform as those guys that have their name on the wall,” he said of players whose numbers have been retired at Dodgers Stadium.

The game wrapped up in a speedy two hours and 28 minutes, the shortest World Series game since Game Four in 1992. 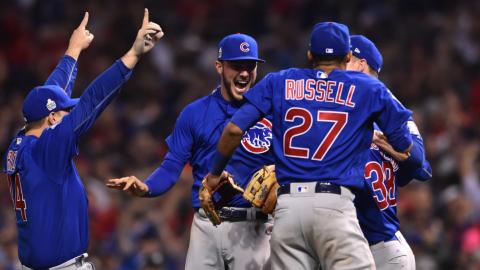