Ronaldo looks set to retire at Real Madrid after agreeing to the new five-year contract.

Cristiano Ronaldo has agreed to extend his contract with Real Madrid until 2021, the European champions confirmed on Sunday.

Ronaldo, Real's all-time top scorer with 371 goals in 360 games, will sign the new deal on Monday at the Santiago Bernabeu Stadium before giving a news conference.

Ronaldo is reported to be in line for an increase on his current salary, estimated to be 21 million euros ($23 million), making him the highest-paid player at Real Madrid.

"The official event for the renewal of Cristiano Ronaldo's contract will take place tomorrow, Monday 7 November at 1:30pm in the presidential box at the Santiago Bernabeu stadium," Madrid said in a statement on Sunday.

"The Portuguese forward will extend his contract until 30 June 2021 at the event attended by club president Florentino Perez and the player himself."

The statement came a few hours after Madrid defeated Leganes 3-0 at the Santiago Bernabeu Stadium to hold the Spanish league lead.

The 31-year-old Portugal captain is in his eighth season with the Spanish football club. He arrived in Madrid from Manchester United in the summer 2009 and his current contract will expire in 2018. The Portugal forward will have played 12 years with the club if he stays through the end of the new contract.

Ronaldo has shot himself into the Real record books in his eight seasons since he left Manchester United. He led Madrid to two Champions league titles in 2014 and 2016. Most notably he scored in the 2014 Champions League final against Atletico Madrid as Real ended a 12-year wait to win their 10th European Cup.

Real's boss Zinedine Zidane called on Ronaldo to end his playing days in Spain like he did when retiring from club football in 2006.

"What he has to do is finish his career here," said Zidane after Sunday's 3-0 win over Leganes extended Madrid's lead at the top of La Liga.

"Cristiano is unique for what he has done and what he is doing.

"It is his dream to end his career here. I am happy that he can renew and finish with this white shirt like I did a long time ago."

As well the individual accolades of winning the Ballon d'Or in 2013 and 2014 for the world's best player since joining Madrid, Ronaldo has won eight trophies with Los Blancos.

His only La Liga title came under Jose Mourinho in the 2011/12 season.

However, arguably Ronaldo's crowning glory came in leading Portugal to their first ever international tournament win at Euro 2016.

After suffering knee ligament damage in the Euro 2016 final, Ronaldo faced criticism for a slow start to this season. His scoreless performance against Leganes extended his worst ever goal drought at the Bernabeu to five consecutive games.

However, Madrid's confidence in handing out a huge deal that will secure Ronaldo's position as the world's highest paid sportsman has not been shaken.

"There is nothing wrong, he is not worried," insisted Zidane.

"He looks good, he is motivated, he likes to scores goals and even more so in this stadium, but he is calm."

Cristiano Ronaldo is the latest Madrid star to follow in the footsteps of Gareth Bale, Luka Modric, Toni Kroos and Lucas Vazquez to agree a contract extension passing 2020. 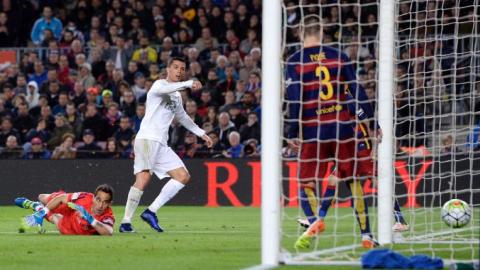