Cristiano Ronaldo scores a hat-trick in the first leg of their semi-final clash to put Real on the verge of another Champions League final.

A ruthless Cristiano Ronaldo scored a dazzling hat-trick to lead Real Madrid to a crushing 3-0 victory over city rivals Atletico Madrid in the first leg of their Champions League semi-final on Tuesday.

The Portuguese forward put his team on the verge of their third final in four years and took his tally to 103 goals in the competition as he helped Madrid vanquish their neighbours at the Santiago Bernabeu.

It was another demoralising European defeat for Atletico at the hands of Real, who had beaten Diego Simeone's side in two of the competition's last three finals.

The plaudits, however, belonged once again to the extraordinary Ronaldo, who followed up his hat-trick against Bayern Munich in the quarter-final second leg at the Bernabeu with another superb treble, his 42nd in all for Madrid.

Ronaldo headed home in the 10th minute after Casemiro's bouncing cross caught out Atletico's defence, before putting his team on the verge of another final appearance after the break.

Karim Benzema set him up to smash home his second on the half-volley in the 73rd minute and he finished from close range with four minutes remaining as Atletico offered little resistance.

"We are very happy with the game, with the three goals and above all keeping a clean sheet at home," said Real's coach Zinedine Zidane, after taking a huge step closer to guiding his side towards becoming the first to successfully defend the European Cup since AC Milan in 1990. 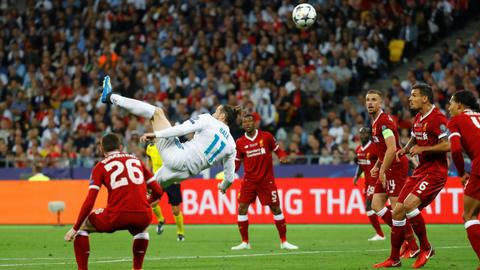