US golfer Jordan Spieth shot a one-under-par round of 69 to finish on 12 under par and beat Matt Kuchar by three strokes. This is his third major title after winning the Masters and US Open in 2015.

Jordan Spieth was relieved to avoid a repeat of his dramatic collapse at last year's Masters as he survived a nervous afternoon to win the British Open at Royal Birkdale on Sunday.

Spieth shot a one-under-par round of 69 to finish on 12 under par and beat Matt Kuchar by three strokes, but at one point it looked as though he would throw it away.

Having been three ahead overnight, he was a shot behind after a wayward drive led to a bogey at the 13th, only to claim three birdies and an eagle in the next four holes and see off Kuchar.

"Boy, this was eventful. Seventeen pars and a birdie would have been fine, too. But there's a lot of roads to get there," he said as he praised his caddie Michael Greller.

"I was put in a tough one early on and showed some resiliency and give a lot of credit to my guy on the bag for that."

"Because as you can imagine, thoughts come in from my last scenario when I was leading a major on Sunday. I never mentioned it, but all of a sudden it creeps into your head."

Spieth had been five shots clear at the turn on the last day at Augusta in 2016 only to go six-over through the next three holes and lose out to Danny Willett.

"I was so confident and all of a sudden, the wheels have kind of come off everything. And how do we get back on track to salvage this round and just give yourself a chance at the end. It took a bogey to do so," he said of his efforts at the par-four 13th.

After that he nearly holed his tee shot at the 14th hole as the momentum swung back his way.

"All of a sudden I felt and believed that I could win that golf tournament, when 30 minutes prior and really the entire day after the fourth hole I didn't feel that way," said the American.

This is his third major title after winning the Masters and US Open in 2015.

His victory meant there would be no first major for Kuchar, but Spieth praised his fellow American.

"I believe Matt Kuchar will win a major championship. And I believe that he'll do it sometime soon."

Kuchar, who had been the joint leader with Spieth after the opening round, shot a final round of 69, which could have been better but for a bogey at the last.

He still secured a best-ever finish at a major, bettering his third place at the Masters in 2012, but he could not hide his anguish at coming second.

"It's crushing. It hurts. And it's an excitement and a thrill to have played well, put up a battle, put up a fight," Kuchar said. 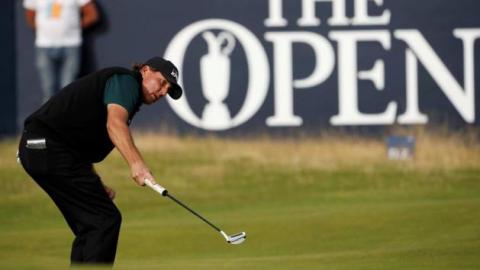