Istanbul governor Vasip Sahin confirms one person is in critical condition after an explosion in a military zone in the city's Sancaktepe District.

Istanbul's governor has confirmed that eight people were hurt when an explosion hit a military vehicle in the city on Thursday.

Vasip Sahin told Anadolu Agency that five army personnel and three civilians were injured in the blast which occurred in a military zone in the Sancaktepe area of the city's Asian side.

Sahin said one woman was in a critical condition.

The bomb, which sent a large plume of black smoke up over the streets, hit around 5:00pm local time (1400 GMT), when military personnel usually leave the facility to go home.

Police and emergency services were seen at the site of the blast and the road had been cordoned off.

An investigation has been launched into the incident. 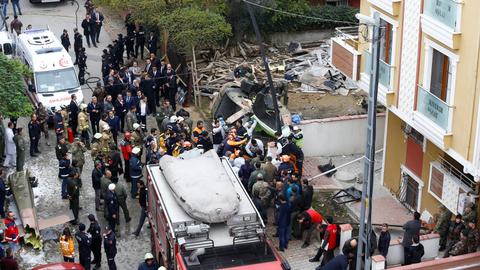