Erdogan calls for compromise with the US on Raqqa operation

The Turkish president, however, ruled out cooperation on the issue of the US-backed but YPG-dominated SDF. Erdogan also reiterated Ankara's view that safe havens and no-fly zones will cut the refugee flow out of Syria.

Erdogan rejected the US statement, saying Turkey was open to coordinating with the US, but not to working with the SDF, which is dominated by the YPG.

"Our attitude is that the SDF should not be part of the operation," Erdogan said.

"If we agree on a common ground with the coalition forces, particularly with the US, we can act jointly in the Raqqa operation," Erdogan added, on his way home from the just-concluded ECO summit in Islamabad, Pakistan.

Erdogan also said Turkey is open to joint operations with Russia against Daesh.

Recently, Turkey and the Turkish-backed Free Syrian Army (FSA) cleared Deash out of al-Bab, al-Rai, Dabiq and Jarablus, in the northern Syrian province of Aleppo.

Erdogan said Turkey's next target would be the northern city of Manbij, held by the US-backed YPG.

The battle for Manbij is part of Turkey's Operation Euphrates Shield, launched in August 2016 to secure Turkey's border with Syria and clear the area of Daesh and the YPG, a Syrian-affiliate of the PKK, designated as a terrorist organisation by the US, Turkey and the EU.

In the battle against Daesh, the US supports the YPG-dominated Syrian Democratic Forces (SDF).

Erdogan said NATO member Turkey had discussed Manbij with the US but that its fellow NATO member had not signalled its intentions.

The US supplies the YPG with heavy weapons and munitions, which the group has used against the Turkish military and its opposition allies.

Erdogan reiterated Turkey's view that the YPG should leave the area and cross to the east of the Euphrates river.

"Manbij belongs to Arabs. Raqqa too. There are around 2,500 Daesh members in Raqqa," the Turkish president said.

The president also repeated his plans for a "safe haven" and a no-fly zone in northern Syria.

"Our goal is to stop threats to our country. We also want to halt the refugee flow, and if possible allow them to return home. Therefore, we call for the construction of a safe zone that is cleared of terrorists." 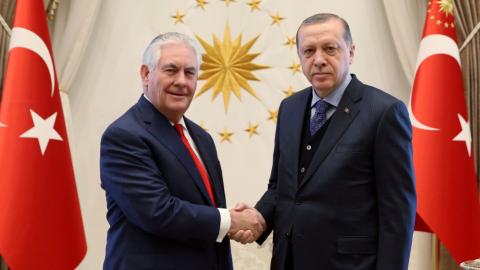 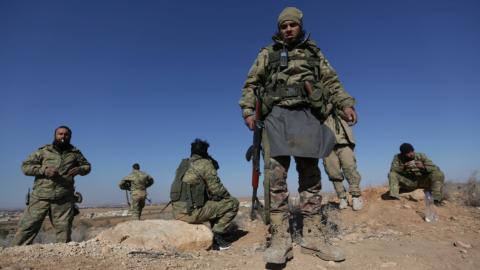 Turkey and opposition forces close in on Daesh-held al-Bab