1
Schools in Turkey to reopen as planned but remotely
2
Greece deprives children of education by closing minority schools: Turkey
3
Gulsin Onay plays Beethoven with a deep love in her heart
4
Turkey wants to resolve eastern Mediterranean issue through dialogue
5
A vet sets up a wildlife rehab, and more, in southwest Turkey

"We can think differently but they (our relations with Russia) are not so weak that the French president can break them," Foreign Minister Mevlut Cavusoglu said.

Turkey on Monday said French President Emmanuel Macron will be unable to "break" its partnership with Russia, after he argued the weekend's air strikes against the Syrian regime had driven a wedge between Ankara and Moscow.

NATO allies, including France, have become wary of the flourishing friendship between Ankara and Moscow based on joint efforts to end the seven-year Syrian civil war.

"We can think differently but they (our relations with Russia) are not so weak that the French president can break them," Foreign Minister Mevlut Cavusoglu said at a press conference with NATO Secretary General Jens Stoltenberg.

Stoltenberg hailed Turkey's position in NATO, which Ankara joined in 1952 with strong American support to anchor Turkey firmly in the West amid the Cold War.

"That is the strength of this alliance: 29 allies, standing together, protecting each other," Stoltenberg added.

'Befitting of a president'

In an interview with French television, Macron suggested that the weekend air strikes against Syrian regime targets had succeeded in engineering a split in the Russia-Turkey alliance.

"With these strikes and this intervention, we separated the Russians and the Turks on this issue... the Turks condemned the chemical strike and supported the operation that we conducted," the French president told BFM TV in an interview.

Russia and Iran are the key allies of Syrian regime leader Bashar al Assad and their military intervention in Syria is widely seen as helping him stay in power.

President Recep Tayyip Erdogan on Saturday had welcomed the strikes, which he described as "appropriate" and strongly condemned the alleged chemical attack.

But Cavusoglu said Macron was mistaken in his assessment and said that Ankara "expected statements befitting of a president" and should express himself "more seriously".

Earlier, Deputy Prime Minister Bekir Bozdag also hit back at Macron, saying our "Syria policy is not a policy of being on the same side or being opposed to another country."

The dispute marked the latest outbreak of tension between Ankara and Paris after Macron offered to mediate between Turkey and the YPG/PKK, an offer furiously rejected by Erdogan.

Erdogan said Monday he had told Macron on the phone that France should first take responsibility for massacres in colonial Algeria and also its failures over the Rwanda genocide before lecturing Turkey on Syria.

"You (France) killed people there. Are you going to account for that?" he said in a speech in Istanbul.

Kremlin spokesman Dmitri Peskov denied that the air strikes prompted a split between Moscow and Ankara, who reconciled in 2016 after Turkey shot down a Russian plane over Syria.

"It's not a secret that Ankara and Moscow's positions differ on a number of issues," he said.

But he emphasised that such differences would have "no impact on the prospects of our cooperation in a number of areas," Peskov.

On a visit to Ankara earlier this month, Putin launched the construction of Turkey's first nuclear power station which is being built by Russia.

Meanwhile, Turkey's Western allies are closely watching its deal to buy S-400 air defence systems from Russia which some officials have warned may not be compatible with Western technology.

Also earlier this month, Erdogan hosted a summit on Syria with Iran and Russia in Ankara, the second such meeting after trilateral talks in November in the Russian Black Sea resort of Sochi.

Cavusoglu said that Macron had expressed interest in attending the Ankara summit and Erdogan then sounded out Moscow and Tehran over the idea.

But while Putin did not oppose him coming, Iran preferred to meet with just the three presidents and leave a broader summit for later, he said. 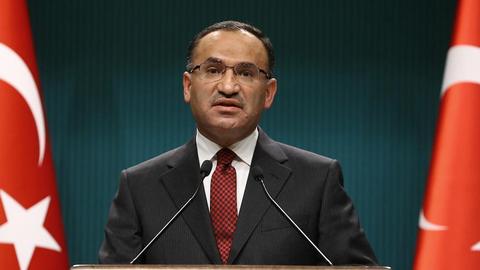 Covid-19 to have a lesser impact on economic growth: Turkey

1
Schools in Turkey to reopen as planned but remotely
2
Greece deprives children of education by closing minority schools: Turkey
3
Gulsin Onay plays Beethoven with a deep love in her heart
4
Turkey wants to resolve eastern Mediterranean issue through dialogue
5
A vet sets up a wildlife rehab, and more, in southwest Turkey