A large portion of Turkey's citizens living in Europe voted for the constitutional amendments that were approved in last Sunday's referendum. While that outcome might have stunned Western critics, there are some real reasons behind the support.

A large portion of Europe's Turkish population voted in favour of the proposed constitutional amendments to Turkey's constitution.

Sunday's results surprised many when it emerged that voters in France, Germany, Austria, the Netherlands and Austria came out and supported the proposals – with the "yes" vote winning by a higher margin than in Turkey itself.

With an estimated 1.4 million eligible voters, Germany's Turkish population was seen as being pivotal in the recent referendum that saw Turkey approve 18 constitutional amendments to the country's constitution.

The outcome of the referendum was that 51.4 percent of the electorate voted in favour of the controversial amendments – a mere 1.38 million votes was the difference.

Much to the horror of critics of the proposed amendments, the majority of voters in Germany, France, Belgium, the Netherlands and Austria voted in favour.

In Germany, a little less than half of those registered to vote took part in the referendum, and 63 percent voted for the amendments that critics have claimed will entrench an autocratic system of government.

"I talked to many German Turkish people. Most of them say that they feel very unhappy about their situation in Germany," he said.

It was somehow to protest. They knew in Germany that there's a big majority [of Germans] that is very critical of Erdogan. Just to protest against the Germans they voted 'Evet'.

He said that many of the people he had spoken with did not know anything about the amendments, but were in favour of "a strong Erdogan."

"Mostly it's that they don't feel welcome in Germany, although it's like the third or fourth generation of Turkish people, most of them born and brought up in Germany," he said.

"They still don't feel German. They still say they are foreigners somehow, which in a way is true. There have been many mistakes in the policy of integration."

He said that the reaction from non-Turkish Germans had been one of shock, even though the result had not been totally unexpected.

"The problem is now it is turning into an anti-Turkish sentiment and the people are saying if you want an autocratic system as you voted, why don't you go back to Turkey?!"

"What you can see now in German society is that there is a great gulf between the Germans and the Turkish and it is becoming deeper."

He said he was not sure whether the result would energise the German right wing parties. He believes that the Turkish voters in Germany who did not vote were either not interested or were fully integrated into Germany. He said the fact that there were only 13 voting stations in Germany also made it difficult for many to cast their votes.

A Turkish journalist based in Dusseldorf, who spoke on condition of anonymity, said Erdogan's interest in the Turkish diaspora had also had a clear effect on the outcome.

"Erdogan was the first Turkish politician who showed a clear interest in the Turks living in Germany. An example of this is his well known call in Cologne for Turks not to assimilate. Many were grateful for this," she said.

In 2008, Erdogan told about 20,000 Turks at a political rally in Cologne that assimilation was a crime against humanity and that Turks should integrate, but never assimilate.

She too expressed concern that the "Yes" vote would have consequences for Turks in Germany.

"There will probably be some pressure on those who voted yes and maybe there will be political consequences for Muslim organisations such as the Turkish-Islamic Union for Religious Affairs. In any case, German society does not show any understanding for this decision."

She said she was not surprised at the result in Germany and believed than many had rebelled at German politicians and media dictating to them as to how they should vote.

"Additionally, the reporting was one-sided and defamatory and therefore out of pride many said yes."

In Austria 73 percent of the 52,000 Turkish voters who cast their ballot voted in favour of Erdogan's proposed amendments.

University of Vienna political scientist Ilker Atac was quoted in the daily newspaper Österreich that many of the country's Turkish residents originated from the more conservative parts of Turkey, hailing from such districts as Trabzon, Yozgat and Sakarya. These areas in Turkey voted strongly in favour of the amendments.

He also cited problems related to integration in Austria as being a big factor behind the large "yes" vote in Austria.

In the Netherlands, 116,500 Turks cast their ballots with almost 71 percent voting in favour of the amendments. The turnout appears to have been higher than in Germany where almost 47 percent casting their votes.

Atac said that in the European countries where Turks had immigrated to fill labour shortages in the mould of Germany's gastarbeiter, or guest workers, the vote had favoured the amendments.

But in the European countries where this was not the case, such as the United Kingdon and Switzerland, the vote had gone against the amendments.

In Switzerland, a little over 50,000 Turks cast their votes, with almost 62 percent voting "no". In the UK, 79 percent of the 35,000 voters opposed the constitutional amendments. 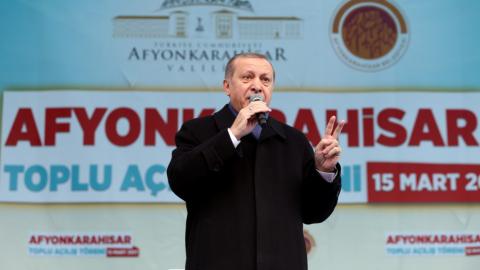