Syrians who have a temporary protection permit must remain in the province in which they were originally registered and obtain a special permit to travel elsewhere in Turkey.

Authorities in Istanbul set a four-week deadline on Monday for Syrians living without approval in Turkey's largest city to return to provinces in which they are registered or face forced removal to those regions.

It was not immediately clear how many people could be affected by the order, but Istanbul's new mayor claims that more than one million Syrians live in the city compared with Interior Ministry figures, which show that only 500,000 are registered.

Turkey's President Recep Tayyip Erdogan said the country welcomes Syrians but criminality will not be tolerated.

Turkey hosts more than 4 million refugees, including 3.6 million Syrians, more than any other country in the world.

Erdogan previously said that Ankara has spent over $37 billion for the Syrians alone.

Anger against the 3.6 million Syrians living in Turkey, the largest refugee population to have fled the eight-year-old civil war in neighbouring Syria, has risen recently.

Most Syrians live in southern Turkish provinces near the Syrian border, but Istanbul province in the north-west has the largest Syrian population of any province in the country.

Syrians who have a temporary protection permit must stay in the province in which they are registered and obtain a special permit to travel elsewhere in Turkey.

The Istanbul governor's office said on Monday that Syrians who have temporary protection permits in provinces other than Istanbul have until August 20 to return to those provinces and will be returned if they stay after that date.

Syrians who do not have temporary protection permits will be sent to provinces specified by the Interior Ministry, it said.

Turkish authorities have clarified that only Syrians involved in illegal activities and ones who have a police record would be deported.

"We had to open our doors to the Syrians. We couldn't ignore it ... We will definitely deport the felons," Erdogan said last week.

There have been several reports in recent weeks of Syrians being deported to Syria.

Reuters has spoken to three people who said they were sent to areas of northern Syria controlled by Ankara and Turkey-backed opposition forces in the past few days.

One of the men said he was deported with at least 100 other Syrians.

Turkey has also been the main route for illegal migrants trying to cross to Europe, especially since the start of the Syrian war in 2011 which has seen more than 10 million people displaced, according to UN figures.

Ankara has accused the EU of failing to fulfil its obligations under a 2016 deal aiming to discourage illegal migration to Europe via the Aegean Sea.

The deal included a $6.8-billion (€6-billion) aid package to help Turkey care for millions of refugees in the country. However, Turkey has so far received only a small sum of the committed amount. 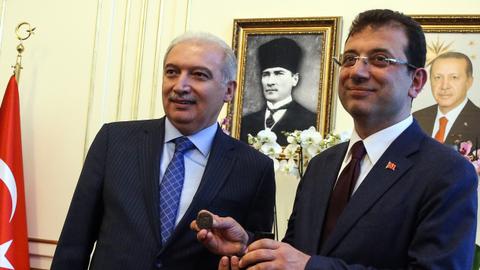