Istanbul’s top two mayoral candidates on Sunday sat down for a debate a week ahead of an election rerun in the Turkish megalopolis, home to some 16 million people. The debate was nationally aired live by virtually all TV channels in the country.

The debate between People's Alliance candidate Binali Yildirim and National Alliance candidate Ekrem Imamoglu at Istanbul’s Lutfi Kirdar Congress Center was moderated by veteran journalist and TV presenter Ismail Kucukkaya. The moderator and the ground rules of the debate were set jointly by the candidates.

The candidates detailed their projects in a tightly moderated, calm and collected atmosphere.

On why the Istanbul race went to a rerun, Yildirim stressed that the governing Justice and Development (AK) Party’s choice was to recount all the votes, not hold a new election, but the opposition party failed to cooperate.

"If my vote was tallied for the CHP [opposition Republican People’s Party] or another candidate, this was theft. There’s no explanation for this," he added.

He added that if the CHP had not resisted the vote recount, the election would not have to be repeated and the public would not be confused.

For his part, Imamoglu rejected the charge of theft, asking who had stolen the March 31 election, in which he was briefly named mayor before Turkey’s election authority overturned the results over irregularities and illegalities.

"Are your [Yildirim’s] words for AK Party polling officials, for the Good (IYI) Party, for the MHP’s [Nationalist Movement Party] or the CHP’s?” he asked, referring to major parties that competed on March 31. “Or for the heads of balloting committees?" he added.

Imamoglu characterized the Istanbul rerun as part of the fight for democracy, "not just a local election."

Speaking on Imamoglu’s attempt to copy data from the Istanbul Metropolitan Municipality during his brief tenure in office, Yildirim said:

"This copying data work is a FETO [Fetullah Terror Organization] tactic. FETO did it in its history,” referring to the group behind the defeated 2016 coup attempt in Turkey.

Yildirim stressed that three experts from outside the municipality were also appointed for the process of copying the data.

"This is a disastrous thing in itself," he added.

In response, Imamoglu said a mayor could do any work or examination regarding his city government.

He also said the process posed no security risk.

Yildirim and Imamoglu are vying for the Istanbul mayor’s seat again after the Supreme Election Council (YSK) ordered a rerun of the March 31 Istanbul polls.

The results of the vote were cancelled after the governing AK Party and Nationalist Movement Party appealed to the council, citing irregularities and violations of election law.

Alleging mismanagement and wasteful spending by the Istanbul city government, Imamoglu said that the city’s biggest problems are poverty and unsound spending.

But Yildirim disputed this, saying, "There is no such a figure in the court of accounts report."

He added that report actually found 108,000 Turkish liras (some $18,300) in irregularities, not the larger figure quoted by Imamoglu, which he said had been repeatedly disproven.

Touching on the Syrian refugee population in Turkey – some 4 million, more than any country in the world – Imamoglu said Turkey has not handled the issue well, and it has had to do it on its own, without international help.

He also said there are 547,000 registered Syrian refugees in Istanbul, or four percent of the population.

Imamoglu also said if elected he will assign a desk just for Syrians living in the city and it will work “actively.”

On the same issue, Yildirim told Imamoglu that such a section already exists, but “maybe it could be strengthened.”

Yildirim mentioned how the issue was caused by the eight-year-long civil war in Syria, saying Syrians fled death in their country.

He also said Syrians in Turkey hold the status of temporary protection and are given basic services such as education and health.

Yildirim also agreed with Imamoglu that Turkey has not gotten enough international support on the Syrian refugee issue.

He also noted that Ankara has already sent back some 500,000 Syrians to areas cleared of terrorists thanks to Turkey’s counterterror operations in the region. 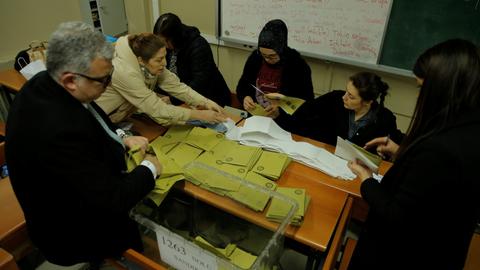