Soldiers linked to an assassination attempt on President Recep Tayyip Erdoğan on the night of the failed coup have been captured.

An operation to capture 11 soldiers had been carried out in Sirinkoy Village in Ula district by gendarme forces, who clashed with rogue soldiers, an eyewitness told Anadolu Agency. There were no reports of casualties.

Two of the captured soldiers were named as Mustafa Serdar Ozay and Muammer Gozubuyuk, according to an official.

At least nineTurkish soldiers were captured in Mugla province, on Sunday, according to local officials.

Major Sukru Seymen, the commander of the fugitive soldiers, is among the arrested suspects who bombed the hotel the president was staying at on the night of the July 15 coup attempt, Mugla Governor, Amir Cicek told Anadolu Agency on Sunday.

The operation to capture them was conducted in Sirinkoy village of Ula district by gendarmerie forces, who engaged the soldiers in a clash, an eyewitness told Anadolu Agency. There have been no reports of casualties.

On the evening of the failed coup, Erdoğan told the nation via FaceTime that he narrowly escaped an attack on his hotel which was bombed fifteen minutes after he left. Erdoğan was on vacation in Marmaris at the time of the coup attempt.

More than 20 suspected members of the military squad involved in the attack, who are believed to have been ordered to capture or kill Erdoğan, were previously remanded in custody to face trial.

Rogue elements within the military attempted a putsch on July 15 that killed 237 people and injured 2,191 others.

The coup failed after citizens took to the streets in the early hours of Saturday morning, upon a call by Erdogan, and became the biggest factor in ensuring the failure of the attempted overthrow of the democratically-elected government.

Gulen is accused of a long-running campaign to overthrow the state through the infiltration of Turkish institutions, particularly the military, police, and judiciary, forming what is commonly known as the parallel state. 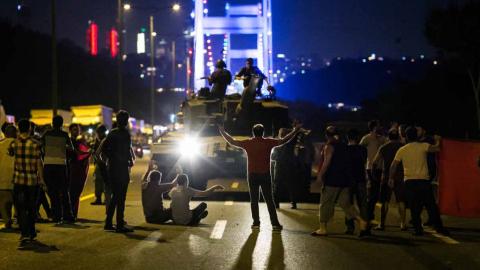