Police detained the man, identified as Abdulgadir Masharipov, in Istanbul's Esenyurt district. Masharipov was wanted by the Turkish police for allegedly gunning down 39 people at Reina, a popular nightclub, during New Year celebrations.

He was captured in an apartment in Esenyurt district of Istanbul with his four-year-old son.

Turkey's police and its intelligence agency, MIT, carried out the operation to capture him.

Four other people, including a man of Iraqi origin and three women, were detained along with Masharipov.

Istanbul Governor Vasip Sahin on Tuesday said the suspect had admitted to the crimes after his fingerprints were matched to the ones found in the nightclub.

Sahin said the suspect entered Turkey illegally from the eastern border of the country in January 2016.

He thanked security forces who had gone through 7,200 hours of CCTV footage from around the city.

According to Sahin, the suspect had reportedly been operating under the cover name Abu Muhammed Horasani.

Reports had previously suggested he never left the metropolis. A tightening of borders had been put in place in a bid to stop him escaping. 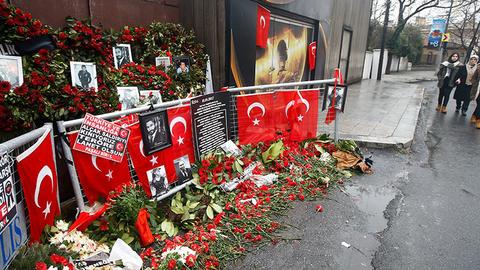