Death toll rises to 50 in terror attack in Gaziantep, Turkey

A blast targeted a wedding hall in Gaziantep Province, on the Turkish border with Syria.

At least 50 people were killed and 94 others wounded late Saturday in an attack on a wedding party in the Turkish city of Gaziantep near the Syrian border, the Gaziantep Governorship office said in a statement.

"Yesterday at 10:50 pm (1950 GMT) 50 of our citizens lost their lives and 94 people were injured in the bomb attack on a wedding," Gaziantep governor Ali Yerlikaya's office said.

"We condemn the traitors who organised and carried out this attack," it added.

Yerlikaya had earlier described the explosion as an "abhorrent terror attack".

A child's shoe is seen in the debris of a bomb attack on a wedding party in #Gaziantep, southeastern Turkey pic.twitter.com/91qtso8tFM

Turkey's President Recep Tayyiğ Erdoğan, condemned the terrorist attack saying there is "no difference between the PKK, which martyred 70 security personnel last month, FETO as a perpetrator of July 15 coup bid claiming 240 lives, and DAESH".

"Those who try to divide our nation by provoking people's ethnic sensitivities will not prevail," he added.

Ambulances raced to the scene in the Akdere neighborhood of Sahinbey district and video footage from broadcaster CNN Turk showed police and emergency service workers rushing through packed streets in the city.

The attack appeared to have hit when a large group of people from a wedding party took to the streets in celebration, one security source said.

No one has claimed responsibility for the attack.

A week of terror

The south eastern part of the city has seen twelve people killed on Thursday in a spate of bombings against Turkish security forces blamed on the PKK terrorist group who appear to have ramped up their campaign of attacks in the aftermath of Turkey's failed coup.

The blast in Gaziantep came on the day Turkish Prime Minister Binali Yildirim vowed Ankara would play a "more active" role in the next six months in efforts to solve the five-year Syrian civil war.

Gaziantep is just north of the Syrian border and has become a major hub for Syrians fleeing the civil war in their country. 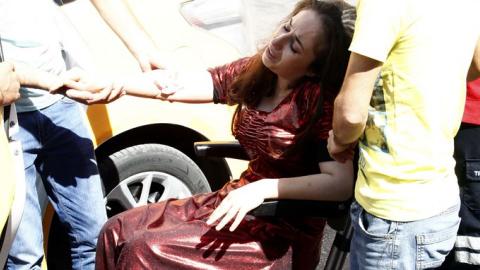 Erdogan: DAESH likely to have carried out Gaziantep attack