Turkey continues fight against terror after lifting state of emergency

The Turkish parliament has approved part of an anti-terror bill that was proposed by the AK Party after lifting the state of emergency in the country.

With the aim of strengthening the country's fight against terrorism, Turkey’s governing Justice and Development Party (AK Party) proposed an anti-terror bill one day after the country observed the second anniversary of the deadly July 15, 2016 coup attempt.

The proposal came three days before the government lifted the state of emergency in the country.

The emergency was declared five days after the Fetullah Terrorist Organisation (FETO) carried out the deadly July 15, 2016 coup attempt, which left at least 250 people killed and nearly 2,600 injured.

The parliament approved parts of the proposed law late on Tuesday and will debate the rest of the bill until October 1.

What does the new law entail?

The anti-terror bill calls for giving governors and security forces some discretionary powers for three more years as they had exercised under the state of emergency.

These powers include prohibiting navigation of vehicles in some areas as well as transporting arms and ammunition.

The bill also authorises the Defence Minister to dismiss personnel of Turkish Armed Forces, police and gendarmerie departments, and public servants and workers if they are found to be linked to a terror organisation.

The proposal also allows law enforcement officials to conduct searches of military sites, with the participation of military authorities and under the supervision of the public prosecutor.

Intelligence agencies will be exempted from the Information Acquisition Law.

The people dismissed from their jobs on alleged links to terrorism cannot be recruited directly or indirectly in public services anymore.

However, people whose objections to dismissals are approved will return to their job in the same staff and ranking. They will also be paid social and financial compensation upon their return.

The people dismissed from the Turkish Armed Forces and police department can be recruited in a “research centre” under the Defense Ministry and Interior Ministry, if the court clears them to return to their job.

The law offers two-day detention periods in the investigations of offences against state security and the constitutional order. This period can be extended to four days in collective crimes. The detentions are extendable by up to two times.

As soon as the law comes into effect, trustees appointed by the Saving Deposit Insurance Fund (TMSF) for companies that are found to have links will terrorist organisations, will continue their job for three more years.

Those officials terminated from their jobs after having been found guilty of membership to a terror group will have their weapons licenses cancelled and would be evicted from public housing or foundation residences.

In the future, these people will not be allowed to be founders, partners and employees of private security companies.

Selman Ogut, associate professor of law at Medipol University, spoke to TRT World about the main reason for drafting the law, which would be valid for three years, is to sack FETO-linked people from civil services, and to swiftly take action against local FETO handlers who were still active and recruiting new admissions.

He was of the view that the administration wants to act quickly and legal regulations can be made for that reason.

Ogut added, "For example, the new regulation may have a new addition that a person found having any link with FETO can be fired from public office. Otherwise, administration of the state will act slowly according to existing laws and that harms general public welfare."

He added, “Similarly if the prosecutor's office finds a person innocent in FETO-related criminal investigations, it should be declared that the said person has no membership to the terror organisation. And the person found innocent ought to be allowed back to duty. However, most investigations are still continuing.”

He said the State of Emergency (OHAL) Commission has more than 100,000 case files related to people suspected of having links to FETO.

"Two months ago, only close to 15,000 of the cases had been reviewed. More than 1,000 people got their jobs back after successful appeals to the state of emergency commission."

Ogut says that the cases against FETO members and suspects should be accelerated for getting results.

“Unfortunately, the OHAL commission has been slow, and justice delayed is justice denied," he added.

During the state of emergency period, a comprehensive investigation was launched to expel people linked to FETO from the police, judiciary and military. Any individuals who have violated their constitutionally defined roles were dismissed from their positions.

The emergency rule helped the necessary legal environment to cleanse the state of US-based cleric Fetullah Gulen's network, that had infiltrated key institutions of the state.

The state of emergency helped Ankara deal with the threats posed not just by FETO but from PKK and Daesh as well.

During the two-year state of emergency, more than 125,000 people were suspended from their positions in the government, including 13,000 from the Turkish military, over their alleged links to FETO.

Over 77,000 people have been detained and are facing charges in court. 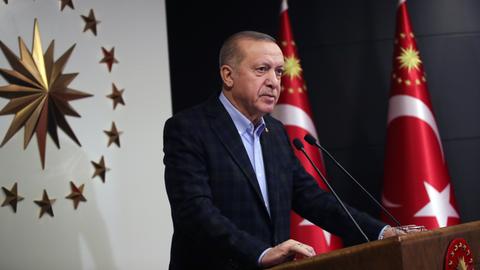