Karkamis, Turkey - Life is just beginning to return to this sparse Turkish town, only kilometres from the Syrian border. The strong August sun bears down on small clusters of people who are slowly returning to their lives in Karkamis.

In the searing heat, shopkeepers keep the lights off in a desperate attempt to keep the shops cool and their patrons comfortable. People have to brave the sweltering streets as they need to stock up; women inside the shops line up, groceries in hand.

In the centre of Karkamis, a small group of middle-aged men shield themselves from the scorching 40-degree heat under the shade of trees that grow just outside a cafe.

For a border town on the road to Syria, the atmosphere is remarkably quiet, the silence punctuated by the dull booms from DAESH-planted mines only a few kilometres away and the clicks and clacks of backgammon chips played by the men outside the café.

The sporadic explosions and gunfire are coming from Jarabulus – where the Turkish Army and Free Syrian Army forces are ridding the town of DAESH, a terrorist organisation.

Most of the people on the streets of Karkamis have just returned home – less than 48 hours after the Turkish Army evacuated the town.

Recep, 10, Ali, 16, and Omar, 12 came back with their families early Thursday morning after being boarded — alongside hundreds of others — on buses late Tuesday evening.

In search of something to do, the three boys meander along the now empty road.

The younger two seemed oblivious to the proximity of war. Ali is more aware of what can fall from the skies; he is old enough to remember the last four years when civil unrest across the border in Syria would intermittently spill over into their world.

From bullets to ball bearings

"In the past there were stray bullets whizzing by, but now it's mortar shells," says Ali, who is in a wheelchair.

The mortars — believed to have been fired by the DAESH last week — and the presence of Turkish troops in and around Karkamis have left both a physical and a psychological imprint on the town's residents, who returned with a sense of unease.

A few kilometres from the main road is a now-abandoned house, hit by a mortar launched from across the border in Syria on August 23. Inside, the walls and door are pockmarked, as if they had been sprayed with clusters of bullets.

But it wasn't a gun that left the golf ball-sized indentations; there are "steel-coated ball bearings and screws in the mortars" according to nearby residents.

One family, whose house is less than 300 metres from the Syrian border, says the shelling began as early as August 20, before Ankara began to speak publicly of the attacks. For the family, who did not wish to be identified, the mortar fire and proximity of their house to the Syrian border proved too dangerous.

Official government figures say between two and four mortars landed in Karkamis last week, but the mother of the family says the actual number is between seven and 10 mortars. Turkish Prime Minister Binali Yildirim cited the DAESH-fired mortar attacks as one of the catalysts behind Ankara's decision to go into Jarabulus.

Fearing what may come next, the family left on Monday, 24 hours before the government-assisted evacuation saw hundreds of other families leaving. They returned home earlier on Thursday.

"They told us it was safe to return, so we did, by our own means," the mother says.

The family has lived in the same house, only metres from a military barracks and a stone's throw from the Syrian border, for at least 23 years.

Their eldest son, 18, was born and raised in this very neighbourhood, but the last six years have been especially trying, as the crossfire and blowback from Syria's civil war does not contain itself to one side of the border. Their fears are further compounded by the fact that their father – the head of the household – works for the local municipality. Attacks by the PKK and DAESH often target government workers.

"I feel a little safer, but, still, Orgut is across the border. As long as they are there I won't feel entirely safe," the son says, using the Turkish moniker for the PKK which Turkey and its allies classify as a terrorist organisation.

The teenager was actually referring to the YPG forces which have been in control of the tiny village of Zur Maghar, two kilometres from Jarabulus, east of the Euphrates River. The YPG is the armed wing of the PYD which Turkey maintains is the Syrian affiliate of PKK.

Though he says the Kurdish group has never caused them any trouble, the 18-year-old is afraid of the YPG.

According to Anadolu Agency, since tensions between the PKK and Ankara reignited last summer, 600 members of Turkey's security forces and thousands of PKK terrorists have been killed by both sides.

Even with DAESH being forced out of Jarabulus by Turkish and FSA forces, the town's location next to the Euphrates put its 10,000 residents at the heart of an ongoing international battle to determine who will control Syria. A conflict which has led to the deaths of hundreds of thousands of people.

As recently as a month ago, Syrian refugees fleeing the war were coming to Karkamis and Gaziantep city, which is at a distance of 75 kilometres. The last few weeks have seen no new arrivals.

According to one store owner, who did not wish to be named, people have been heading south towards Jarabulus; possibly Syrians who had been hiding in the town and feared the blowback from Operation Euphrates Shield. He says he did not leave during the evacuation and "several people have been spotted heading back" in the direction of Syria.

However, there have been occasions when members of DAESH and YPG, holding a 100-metre stretch, do make it inside Turkey.

One of the three boys,12-year-old Omar, said they were woken up by the sound of gunfire and footsteps on their roof.

It turned out to be an alleged DAESH terrorist trying to escape Turkish Army Operation Euphrates Shield, as it has been codenamed.

"He was running from the bombing," adds Recep.

Without a deadline for Operation Euphrates Shield, the residents of Karkamis once again find themselves trapped between several opposing forces of a conflict that has consistently pitted some of the world's most powerful groups, and nations, against one another.

For the foreseeable future, the small town's residents will continue to shape their lives in response to a foreign war that has surrounded them on all sides.

"It's safe for now, but we don't know what tomorrow will be like, if we have to leave again, we will," says the mother of the family by the military barracks of the situation she and thousands of others in Karkamis continue to find themselves in. She took a nervous look around at the uniformed security forces before she barricaded herself inside her house.​ 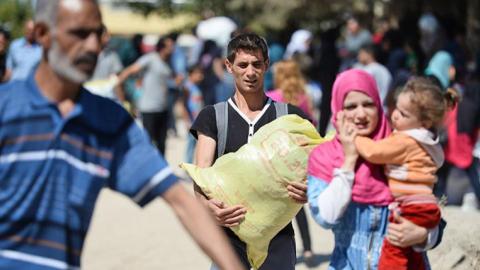