Four articles were adopted overnight. The assembly has now approved 11 articles in the second round of voting. It is on track to pass the remaining seven articles and vote on the package as a whole on Friday night.

During the evening debate an independent lawmaker, Aylin Nazliaka, handcuffed herself to the podium in protest against the reforms, triggering a scuffle between MPs of the governing AK Party and opposition parties.

President Recep Tayyip Erdogan says the revised constitution will provide stability at a time of turmoil and prevent a return to the fragile coalitions of the past.

The assembly has now approved 11 articles in the second reading of the bill. It is on track to pass the remaining seven articles and vote on the package as a whole on Friday night.

Providing it garners the support of at least 330 deputies in the 550-member assembly in the remaining votes, the legislation will go to a referendum, expected in the spring.​

The governing AK Party with 316 seats supports the bill, as does the nationalist MHP with 39 seats. The main opposition CHP and the HDP, the second largest opposition party, oppose the changes. 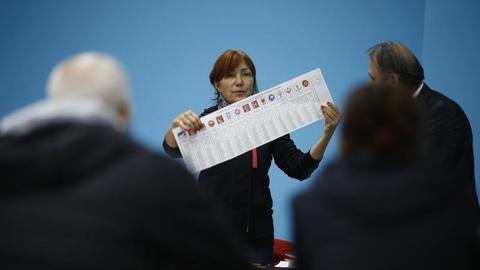 What is Turkey's new electoral alliance about?