The president has reported that he and his wife are experiencing mild symptoms and they will continue to work from home.

Turkiye's President Recep Tayyip Erdogan and First Lady Emine Erdogan have tested positive for the Omicron variant of the coronavirus.

The president made the announcement on Saturday via his official Twitter account after appearing via videolink at a tunnel-opening ceremony from Istanbul.

"This morning, our doctor performed our routine check-up. Thankfully, nothing bad." Erdogan said on Twitter on Sunday.

"We have mild symptoms, and we continue our work from home with my wife."

He individually thanked world leaders for their well wishes.

READ MORE: How worried should we be about the new Omicron variant?

READ MORE: What we know about the Omicron sub-variant BA.2

I wish President of Turkey Recep Tayyip Erdogan to get quick recovery from Omicron virus. Mr President, I sincerely wish well-being to your family.

In his message to Erdogan, Putin was quoted saying "Dear friend, I would like to sincerely support you and your spouse. I am sure that your vitality and good mood will help you defeat the virus as soon as possible."

In a written statement from Hamas, leader Ismail Haniyeh said the president and the first lady of Turkiye were in their prayers and wished them well on behalf of the Palestinian people.

"On behalf of our government, the people of Pakistan and on my own behalf I wish them a swift and complete recovery," Pakistan's Prime Minister Khan wrote on his Twitter account.

Ι wish President @RTErdogan and his wife a swift recovery from COVID-19.

Vjosa Osmani, President of the Republic of Kosova, also wished a speedy recovery to the president and the first lady. She added "Get well soon!" in Turkish on her Twitter account.

Guatemalan President also expressed his solidarity and wished a speedy recovery on behalf of the government and people of Guatemala.

Turkiye requires people to isolate for seven days if they test positive. However if they test negative on the fifth day, they can leave quarantine.

The country has seen record levels of Covid-19 cases in recent days, with 111,157 cases reported by the Health Ministry on Friday.

In late December, daily cases stood at about 20,000 but have risen due to the highly transmissible Omicron variant. The country is also seeing a high number of fatalities due to Covid-19, with 248 deaths reported on Friday, a level not seen since October. 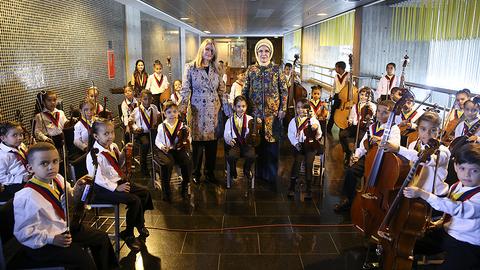