This is what world leaders had to say about Turkey's referendum

Some say the results should be respected while others urge Turkey to seek a consensus while implementing constitutional changes that will transition the country to a presidential system. 51.3 percent of the voters said "yes" to these reforms.

Turkey's referendum on whether to change the country to a presidential system of governance evoked various reactions from global leaders after the "Yes" campaign clinched the victory.

Based on Sunday's count of the ballot, 51.3 percent of the voters approved changes to Turkish constitution, empowering the office of the president.

This is what world leaders have to say:

"The tight referendum result shows how deeply divided Turkish society is and that means a big responsibility for the Turkish leadership and for President Erdogan personally."

"The referendum is a sovereign affair of the Republic of Turkey. We believe that everyone should respect the will of the Turkish people," Peskov said.

"It's up to the Turks and them alone to decide on how they organise their political institutions, but the published results show that Turkish society is divided about the planned deep reforms," Hollande's office said in a statement.

"In view of the close referendum result and the far-reaching implications of the constitutional amendments, we also call on the Turkish authorities to seek the broadest possible national consensus in their implementation," the Commission said in a statement.

"Certainly, this referendum will mark the beginning of a new stage in the history of your brotherly country and reinforce the international role and standing of a stable and powerful Turkey," he said 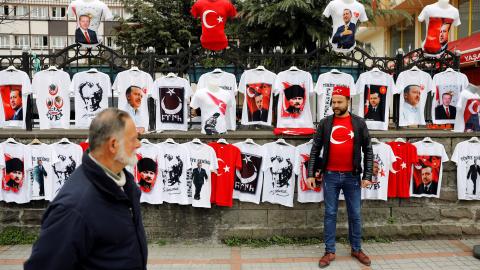 Turkey: Illegal EU raid on ship was flawed from the start