In 2002, the economic burden of the devastating earthquakes of 1999 weighing heavily on Turkey. A political crisis between then President Ahmet Necdet Sezer and the governing three party coalition led by the Democratic Leftist Party triggered the worst economic crisis of Turkish history. A coalition of three parties including a social democrat party, center-right right party and nationalist party was shaking. The representation of Turkey’s religious population was prevented in 1999 with the closure of the conservative Virtue Party by Turkey’s supreme court on the pretext of “guarding secularism.” The decisions came after Merve Kavakci, who was wearing the headscarf, was dismissed from the parliament with a cry from then prime minister Bulent Ecevit to “Teach this woman her place!”. The incident produced two parties the conservative Justice and development Party, or AK Party, and the more religion-oriented Felicity Party. The mayor of Istanbul, Recep Tayyip Erdogan, who had previously been jailed and banned from politics because he read a poem established the AK Party even though could not stand as a candidate in parliament. The leader of the MHP, Devlet Bahceli, called for an early general election which changed the political climate of Turkey. On November 3, 2002, the election was held and the AK Party won 34 percent of the vote and gained 365 seats in parliament. The Republican People’s Party, or CHP, assumed the role of chief opposition party after gaining 19 percent of the vote and 177 party deputies along with eight other independent deputies in parliament. The center-right True Path Party, or DYP - could not pass the 10 percent electoral threshold and was pushed out of parliament. A new political era had begun. ‘I will step up onto the tanks if needed!’ A temporary government was formed under the leadership of Abdullah Gul, Erdogan’s closest friend for many years. As one of its first decisions the government passed an amendment in order to remove Erdogan’s ban with the CHP’s surprise support. Meanwhile, Turkey’s Electoral Board voided the election results from the southeastern province of Siirt due to voting irregularities. On February 9, 2003, Erdogan was chosen by the people of Siirt in the second election and stood as Turkish Prime Minister. However, non-political actors were still powerful. Erdogan gave a speech on August 12, 2005, in Diyarbakir which showed the first signs of a new Kurdish Solution Process. The speech was slammed by Turkish ultra nationalists and initiated a societal discussion. On April 16, 2007, applications for presidential candidacy began. Simultaneously, a couple of ultra-secularist mass protests known as the “Republican Marches” were launched. Abdullah Gul was put forward as candidate by the AK Party, which the secularists thought to be an attempt at “capture of the secular state.” Around the same time the Turkish army published a memorandum on April 27 which proclaimed those who “exploit the religion and object to being Turks” as the enemies of the Turkish Republic. The media and public construed the memorandum as a coup signal. Erdogan said to made the memorable statement “I will step up onto the tanks if needed!” The government decided to launch an early election and “turned to the nation to make a judgement”. On July 22, 2007 the AK Party won 46 percent of the vote and 341 seats in the election and remained as Turkey’s governing party. The main opposition CHP gained 20 percent and 112 deputies, while the Turkish nationalist MHP entered parliament with 14 percent and 71 seats. Pro-Kurdish politicians joined parliament without trouble for the first time with the election 26 independent deputies. Facebook: https://www.facebook.com/trtworld Twitter: https://twitter.com/trtworld 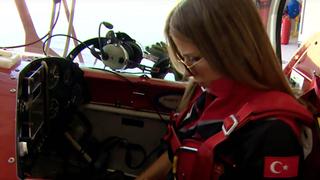 What’s next for the Turkish republic under President Erdogan?

Protests continue in Washington as more troops flow in

German prisoner is a new suspect in girl's disappearance

The Class of 2020 faces the worst job market in history