Former prime minister Abdelmadjid Tebboune was sworn in as the new president of Algeria a week after winning a widely-boycotted election.

After eight months without a leader, Algeria inaugurated Abdelkader Tebboune as its new president on Thursday during a pomp-filled ceremony that pro-democracy protesters rejected as a charade. The protest movement debated a response to his offer of dialogue to end a months-long political crisis.

The Hirak movement has mobilised huge street protests since February demanding a full clear-out of a shadowy, long-entrenched ruling elite that it sees as corrupt and undemocratic, and the army’s withdrawal from politics.

Members of the African nation's governing elite, in turn, hope Tebboune's inauguration will allow gas-rich Algeria to turn the page on 10 months of protests that put their legitimacy to lead in doubt and stalled the economy.

Uniformed officers from the four branches of Algeria's powerful military saluted 74-year-old Tebboune as he arrived at the presidential palace in Algiers for his inauguration.

The new president was decorated with the national merit award as a military band played the Algerian anthem.

In his first presidential speech, Tebboune praised the protest movement that successfully pushed Algeria's president of two decades, Abdelaziz Bouteflika, from office in April. He thanked voters who he said put the country back on the “constitutional track”.

"Tebboune is not my president. He doesn't represent Hirak and has no legitimacy. Protests must go on until the people become the decision-makers," said Slimane Hachoud, 24, who has been protesting since February.

Since the election, the weekly Friday and Tuesday protests have gone ahead as usual, though there were widespread reports of police arresting many demonstrators in the western city of Oran.

The former prime minister considered to be close to Algeria's powerful army chief, was elected with 58 percent of the vote in an election boycotted by members of the country's peaceful protest movement.

They rejected the election because it was organised by the political elite.

Tebboune has promised to reach out to the Hirak movement protesters and to fight corruption, a major problem in Africa's biggest country. 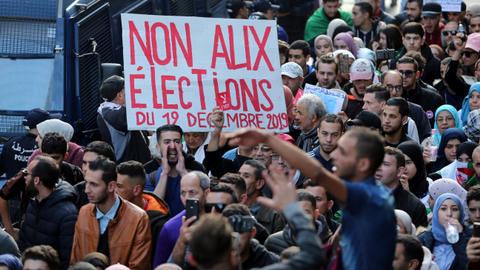