The opposition group says the key ideas discussed during the talks has been left out of the final document while others have been added in.

Mali's popular opposition movement has rejected a charter for a transition government backed by the army officers who ousted President Ibrahim Boubacar Keita.

The military junta backed an arrangement for an 18-month transition government on Saturday, after a three-day forum with political parties and civil-society representatives.

But the June 5 Movement (M5), which took part in the talks, rejected the roadmap in a statement on Saturday night, accusing the junta of a "desire to monopolise and confiscate power."

Key ideas discussed during the talks had been left out of the final document while others had been added in, the group said.

The talks had taken place against a backdrop of "intimidation, antidemocratic and unfair practices worthy of another era," it added.

The coalition of opposition groups, religious leaders and civil figures was behind months of protests against Keita, which led up to his ouster and arrest in a military coup on August 18.

But the group said that ideas such as the broad support for a civilian transition president had not been reflected in the final document.

The committee overseeing the talks that adopted the final version of the charter by acclamation on Saturday, was chosen by the junta.

Under the terms of the final document, either a civilian or a military officer can become transition president, the committee's rapporteur Moussa Camara told delegates.

AFP has not seen the final version of the charter. But an earlier version seen on Saturday stipulated that a junta-appointed committee would pick the transition president, raising questions about the military's influence.

As the forum came to a close on Saturday, leading M5 member Sy Kadiatou Sow said the final version of the charter had been "butchered."

"This is not democratic at all," he added.

On Sunday, Sidebe Dedeou Ousmane, a union leader and M5 member, told AFP that from the ideas discussed at her workshop, "none of the proposals were included in the final report."

But Moussa Mara, a former prime minister, on Sunday defended the charter and urged "all Malians" to commit to the transition.

"The documents produced are not perfect, but they are a basis for starting the transition period," he said.

Mali's neighbours, who are anxious to avoid the fragile Sahel state spiralling into chaos, are yet to react to the transition charter.

Last month's coup — Mali's fourth since gaining independence from France in 1960 — came after months of protests stoked in part by Keita's failure to quell a militant insurgency that has plagued the country since 2012.

The violence has since spread to neighbouring Burkina Faso and Niger.

It has also closed borders and banned trade with the nation of some 19 million people.

ECOWAS leaders are nevertheless prepared to engage with the junta, and a meeting between the two sides is scheduled for Tuesday, in Ghana's capital Accra. 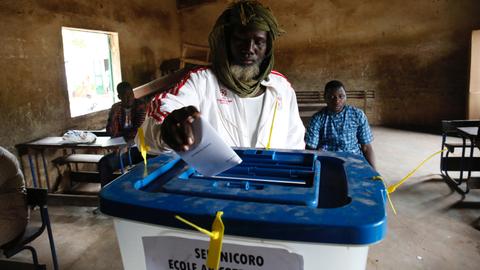