The mercenaries drove into Al Sharara oilfield in a convoy of vehicles late on Thursday, the NOC said in a statement on its website, expressing "great concern."

Russian and other foreign mercenaries have entered a key oil field in southern Libya, the conflict-hit country's National Oil Corporation said on Friday.

After a month-long suspension, Al Sharara, under the control of militias loyal to eastern military warlord Khalifa Haftar, resumed operations at the start of June, only to halt work again three days later at the instruction of those fighters.

Libya's new government was founded in 2015 under a UN-led agreement, but efforts for a long-term political settlement failed due to the military offensive by Haftar’s militia, resulting in civilian chaos and more than 1,000 deaths.

Haftar's militias, which are backed by Russia, Egypt and the UAE, launched an assault in April 2019 to wrest control of the capital Tripoli from the UN-backed Government of National Accord.

But warlord Haftar's militants withdrew from the southern outskirts of the capital, and the entire west of the country, earlier this month, after a string of battlefield defeats to the Turkish-backed GNA.

Moscow denies any involvement in the presence of Russian mercenaries in the conflict, despite a UN report in May alleging mercenaries from the Wagner paramilitary group, reputedly close to President Vladimir Putin, are on the ground.

Read more: The US says it has strong evidence of Russia's aircraft delivery to Libya

US Embassy in Tripoli said the involvement of Russia’s Wagner mercenaries group was a direct assault against Libya’s sovereignty.

“We share the NOC’s deep concern about the shameful interference of Wagner and other foreign mercenaries against NOC facilities and personnel at the al-Sharara oil field, which constitutes a direct assault against Libya’s sovereignty and prosperity,” the embassy said.

“The Embassy also regrets that Libyan parties have been unable to reach a solution that would lift the needless oil and gas blockade and allow the NOC to resume its vital work across the country on behalf of all Libyans,” it added.

@USAEmbassyLibya - "As responsible actors in #Libya return to UN-facilitated ceasefire talks and demand an end to foreign interference, allowing the NOC to immediately resume operations is a critical step to reestablish Libyan sovereignty." Full statement: https://t.co/L4gbiKXXWs

"Today we will discuss everything that I have just listed, one way or another, and of course we will talk about the growth of explosive potential in hot spots, about the problems of Ukraine, the Balkans, the situation in Syria and Libya," Putin said.

The Russian president also invited his French counterpart to Russia, which he accepted, saying he will come at the end of summer if the conditions are favorable.

"Libya's oil is for the Libyan people, and I completely reject attempts by foreign countries to prevent the resumption of oil production," he said.

"We do not need Russian and other foreign mercenaries in Libyan oilfields whose goal is to prevent oil production," said Sanalla.

"We need patriotic, professional, and independent security forces who will facilitate the resumption of oil production for the benefit of all the Libyan people, with revenues allocated fairly and transparently across the whole of Libya."

Oil exports are the source of almost all the state's revenues, and Libya has the biggest proven crude reserves in Africa. 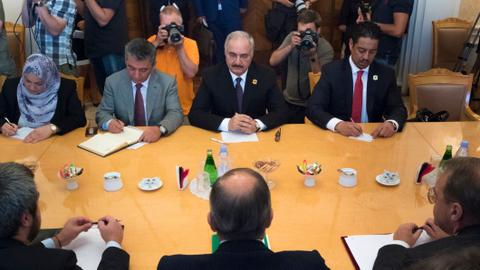