Turkey, Russia diplomats to meet for Libya talks in Istanbul

1
What you need to know about Covid-19 vaccines in the works
2
Turkey: Permanent peace possible if Armenia leaves Azerbaijan territories
3
Will Zambia be able to stand up to private creditors?
4
TRT World journalist wins prestigious FIPP award
5
Are PKK-linked terrorists fighting alongside Armenia in occupied-Karabakh?

Two senior Russian diplomats will visit Istanbul on Sunday for talks with their Turkish counterparts on the situation in Libya, broadcaster CNN Turk said on Saturday.

Other media carried similar reports, with Turkish state broadcaster TRT Haber saying that the ministers would also discuss the situation in Syria.

Meanwhile, Algeria's President Abdelmadjid Tebboune on Saturday said Libya's conflict doesn't have a military solution and that his country is ready to help end the conflict there.

"The solution for Libya cannot be military," Tebboune said, according to an official statement.

"Algeria stands at equidistance from all parties and is ready to help end the crisis."

Tebboune said: "Algeria is very sad about the situation in which this sister country finds itself because it has experienced such tragedies and knows how to get out of them."

Also on Saturday, EU said moves to cooperate with NATO over a naval mission enforcing an arms embargo on Libya were not prompted by a recent incident in which Greek navy tried to stop Turkish frigates and a Turkish cargo ship en route to Libya.

The Greek ship retreated after a warning from the Turkish ships.

"This is part of a natural process between two organisations that are cooperating and working together to achieve common results: the security and stability of Europe and its neighbourhood," the EU spokesperson said in a statement issued late Friday.

"This cooperation was not triggered in any way by any recent events – it is rather part of our natural and usual dialogue and exchanges."

NATO on Friday confirmed it was looking at how its Operation Sea Guardian, which has two ships patrolling the Mediterranean, could support the EU's new Operation, Irini.

Libya's internationally recognised Government of National Accord (or GNA), has in recent weeks repelled assault on Tripoli by warlord Khalifa Haftar's illegal militia.

GNA also recaptured Tarhouna, ending a 14-month offensive on the capital by the eastern-based Haftar militia, earlier in June.

United Nations says at least eight mass graves have been discovered in the town of Tarhuna, a key western area that served as a main stronghold for Khalifa’s militia in their campaign to capture capital Tripoli.

The discoveries have raised fears about the extent of human rights violations in territories controlled by Hafter’s militia, given the difficulties of documentation in an active war zone.

Meanwhile, mines planted by militants of Haftar claimed the lives of two civilians in a civilian settlement in Tripoli.

The civilians died from mines planted in the southern part of the capital, according to a statement by the Volcano Of Rage Operation led by the Libyan army.

This week the EU Ambassador and the Minister of Interior discussed ongoing EU support in demining and clearing IEDs in Tripoli for the safe return of the inhabitants. The EU provides technical assistance, equipment and mine risk education, and is ready to step up this support. pic.twitter.com/oL0CnFqmNP

Authorities reported mines and improvised explosive devices in civilian settlements have claimed 29 lives and wounded 40 others.

In line with a request by the government, Turkish Armed Forces recently began to clear mines planted by Haftar’s militia prior to their withdrawal to ensure the safe return of residents to their homes. 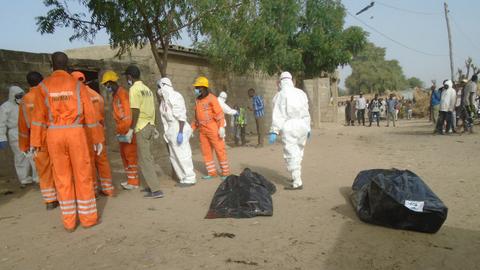 1
What you need to know about Covid-19 vaccines in the works
2
Turkey: Permanent peace possible if Armenia leaves Azerbaijan territories
3
Will Zambia be able to stand up to private creditors?
4
TRT World journalist wins prestigious FIPP award
5
Are PKK-linked terrorists fighting alongside Armenia in occupied-Karabakh?