US shuts down Palestine Liberation Organization's mission in Washington

The US on Monday announced the closure of the Palestine Liberation Organization's (PLO) Washington diplomatic mission by October 10 after a Palestinian bid to have Israel investigated for war crimes at the International Criminal Court.

The United States has decided to shutter the Palestinian mission in Washington in the latest move against them by President Donald Trump, a Palestinian official said on Monday, denouncing what he called a "dangerous escalation."

A US State Department spokeswoman said the mission would be closed by October 10, 2018.

The closure comes as Trump seeks to force the Palestinian leadership, which has cut off contact with the White House, to negotiate with his team pursuing a plan for Middle East peace – something the US president has termed the "ultimate deal."

The United States has also been angered by a Palestinian bid to have Israel investigated for war crimes at the International Criminal Court.

Palestinian officials say the reason given for the closure was their stepped-up campaign at the ICC.

"We have been notified by a US official of their decision to close the Palestinian mission to the US," Palestine Liberation Organization secretary-general Saeb Erekat said in a statement.

"This is yet another affirmation of the Trump administration's policy to collectively punish the Palestinian people, including by cutting financial support for humanitarian services including health and education."

Under long-standing American law, permission for the PLO to maintain its mission in Washington must be renewed every six months.

US officials say Palestinian leaders have breached the arrangement by calling for Israeli officials to be prosecuted at the ICC in The Hague.

The United States had already threatened to close the office in November.

The decision comes just ahead of the 25th anniversary of the first Oslo accord on September 13, which was famously sealed with a handshake on the White House lawn and raised hopes of a lasting Israeli-Palestinian peace.

Husam Zomlot, head of the PLO mission in Washington, told journalists in Ramallah that the closure was "to protect Israel from war crimes, crimes against humanity that Israel is committing in the occupied Palestinian territories."

Both Erekat and Zomlot pledged to push forward with Palestinian efforts at the ICC, where the chief prosecutor has already opened a preliminary probe into the allegations.

TRT World spoke to Chiara Ayad, a Middle East expert at the Arab Reform Initiative, for her analysis from Paris.

The White House had not yet commented on the mission's closure, but the Wall Street Journal reported US national security adviser John Bolton was due to announce it in a speech later on Monday.

The Palestinian leadership cut off contact with the Trump administration after the US president recognised the disputed city of Jerusalem as Israel's capital in December.

The Palestinians see East Jerusalem as the capital of their future state.

Trump has since pledged to withhold aid from the Palestinians until they return to the negotiating table.

In recent weeks, the United States has cut more than $200 million in bilateral aid to the Palestinians as well as cancelled its support for the UN agency for Palestinian refugees.

In making such moves, Trump has sided with Israel on core issues in the conflict without publicly asking for any concessions in return.

Palestinian leaders see his White House as blatantly biased in favour of Israel.

"Part of it is bullying," Zomlot said in response to a question about the US strategy.

"But the main part of it is just going ahead and implementing the grocery list that was submitted to them by (Israeli Prime Minister Benjamin) Netanyahu."

The Palestinians have asked the ICC to investigate Israel on issues ranging from settlement building in the occupied West Bank to civilian casualties in the 2014 Gaza war, among others.

And just like that, illegal Israeli settlements are now ‘legal’ 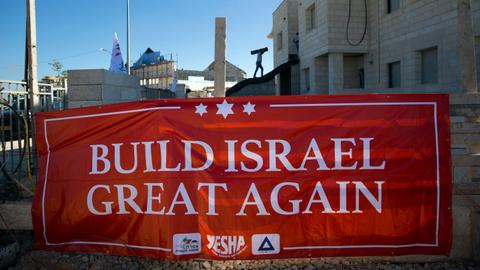 How Israel uses attacks as an excuse to expand illegal settlements