1
Türkiye is determined in the fight against climate crisis: Emine Erdogan
2
Türkiye's famous Kirkpinar oil wrestling event marks record participation
3
Millions of people in Germany are poor as inflation soars
4
How to Steal a Country | Storyteller
5
Erdogan: Time to see implementation of commitments by Finland, Sweden

The move displays the commitment of the Turkish Republic of North Cyprus (TRNC) to developing the region marred by political uncertainty due to unresolved issues between Cypriot Turks and their Greek counterparts.

In a crucial move to develop the region, Turkish Republic of North Cyprus (TRNC) has announced the opening of the divided island’s ghost city, known as Varosha by Cypriot Greeks and Maras by their Turkish counterparts, set to support the catering and tourism industries.

In 1974, Turkey's military intervened in Cyprus to prevent a change in the island’s political status quo following the Greek Cypriot military coup against the internationally-recognised government of the Republic of Cyprus. In the following years, Maras, which was once a popular tourist spot, experienced a major population drain with Cypriot Greeks completely abandoning the city.

The island, which is located in the middle of Eastern Mediterranean Sea, has two political entities, one led by Greek Cypriots in the south and another led by Turkish Cypriots in the north, which became the Turkish Republic of North Cyprus (TRNC) in 1983, recognised only by Turkey.

With the latest move, the TRNC has signalled that Maras will regain its lost glory and people will once again call it the Las Vegas of the Mediterranean.

“Time has come to take a tangible step about the closed Maras [Varosha],” said Kudret Ozersay, Deputy Prime Minister and Foreign Minister of the TRNC, on Tuesday, after a cabinet meeting.

“No steps have been taken in regard to Maras' status until now. Such a step is about the future and our projects will be materialised more and more [in time],” said TRNC Prime Minister Ersin Tatar.

“South Cyprus [the Greek Cypriot Administration] could object to our decision, but at the end, Maras is under our governance. We will surely evaluate the situation along with the Republic of Turkey. What must be done will be done. This is the beginning,” Tatar added.

Maras used to be one of the favourite hangouts for major celebrities including Hollywood heartthrobs such as Elizabeth Taylor, Marilyn Monroe, Richard Burton and Brigitte Bardot.

Located in the southern part of the city of Gazimagusa (Famagusta), Maras had 45 hotels with a 10,000 capacity, 60 apartment hotels, 3,000 trade entities, 99 entertainment venues, and 21 banks, as well as 24 theaters, 25 museums and 4,649 private houses before it became a ghost city. It also had a medium-sized library with 8,500 books, which were in English, Greek and Turkish.

According to recent estimations, the redevelopment plan for the city could be around $10 billion.

“I think that [[the TRNC] step in regard to Maras] could facilitate a process, which could help overcome the existing status quo over the Cyprus issue,” said Mustafa Lakadamyali, Turkish Cypriot Ambassador, representing the TRNC in Washington, DC.

For more than 50 years, both Turkish and Greek Cypriots have negotiated with each other for a federation based on political equation with two communities and two regions, but they could not reach a concrete resolution because the Greek side does not want to share the island’s power and wealth with Cypriot Turks, according to Lakadamyali.

Greek Cypriots still claim to represent all the territories of Cyprus, even though Britain, Turkey and Greece are the guarantor states for the entire island, which was established in 1960 as the Republic of Cyprus. The area in the south of the island is run by Greek Cypriot Administration (GCA).

“GCA has continued to be benefited by the existing status quo through unilateral actions, using [the Cyprus] deadlock to their favour. In order to change things in Cyprus, this status quo should be shaken,” Lakadamyali told TRT World.

“The recent Maras initiative could do the job.”

In 1994, Cypriot Turks and Greeks discussed opening Maras to settlements in exchange for both sides using Lefkosa (Nicosia) International Airport as part of confidence building measures. But the talks eventually failed.

Maras has always been an important aspect of the Cyprus issue and both sides have aggressively negotiated the city’s political status under lands titles.

According to UN Security Council resolution 550, dated in 1984, Maras could only be opened to settlement to its original inhabitants, who were living there before 1974.

However, Tatar has assured that the property rights of Maras' migrants will be respected at any cost.

“The rights and interests of old owners and the Evkaf (an Islamic trust) will be taken into consideration when Maras opens,” Tatar said.

The TRNC’s newly reactivated Cyprus diplomacy has also been reinforced by Ankara’s increasing presence in the Eastern Mediterranean, where Turkey sent a second drilling ship, Yavuz, to the region close to Maras at the Bay of Gazimagusa to explore newly discovered gas fields.

Yavuz is capable of carrying out hydrocarbon explorations to a depth of 3,300 metres and will begin its work in July in the Karpaz-1 well to the east of the island.

The newly discovered gas reserves in the region’s Levant Basin have presented an opportunity to the conflicting parties to find a common denominator and address the ongoing dispute.

Turkey and the GCA, in particular, have serious disagreements over the ownership of gas fields with the determination of EEZ in the Eastern Mediterranean further complicated by the unresolved Cyprus issue.

"The Greek Cypriot administration does not have a right to take decisions on its own or even have a say in any matter concerning the whole island," said Fatih Sonmez, Turkey’s Energy Minister.

Turkey has strongly protested the EU threats against Ankara. Brussels has recently urged Turkey to stop its drilling efforts in the region to back up the GCA claims.

"We will fully defend the legitimate rights of our country and the TRNC in the Mediterranean. We will continue our drilling activities, which is rooted in our own legitimate rights. Yavuz will show the nation's determination to the whole world once again," Sonmez said.

Ankara has previously sent Fatih, another drilling ship, to the west of the island for exploration efforts.

In total, the Levant Basin has gas reserves amounting to 3.45 trillion cubic metres as well as 1.7 billion barrels of oil, according to Zeliha Khashman, Professor of International Relations at Near Eastern University in the TRNC.

“These newly discovered natural gas resources have been assessed to be huge resources for the region and also for Europe,” Khashman indicated in a previous interview. 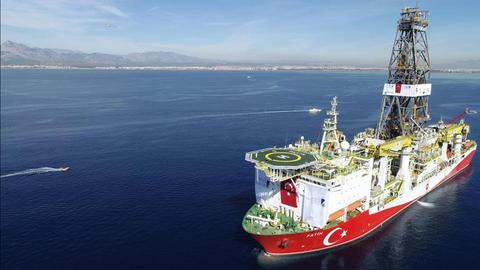 1
Türkiye is determined in the fight against climate crisis: Emine Erdogan
2
Türkiye's famous Kirkpinar oil wrestling event marks record participation
3
Millions of people in Germany are poor as inflation soars
4
How to Steal a Country | Storyteller
5
Erdogan: Time to see implementation of commitments by Finland, Sweden