Offshore findings of rich gas reserves in East Mediterranean compound political problems regional players coasted to the ancient sea have each other. Here we explain why it is so.

Recent discoveries in the eastern Mediterranean’s Levant Basin have shown that the region’s continental shelf, which has long been disputed among the neighbouring states, contains rich gas reserves.

Beyond the maritime disputes between the respective states, the discovery threatens serious political problems, causing experts to believe that gas exploration could make things worse rather than better.

Turkey protested the Egyptian coup in 2013 against the country’s democratically-elected president, Mohammed Morsi, and as a result relations have since been tense.

There have also been political tensions between Israel and Lebanon for decades. Israel has invaded Lebanese territory several times, leading to thousands of casualties. And Syria, neighbour to both Israel and Lebanon, has been embroiled in a civil war since 2011.

In Cyprus, located in the middle of the eastern Mediterranean, the island’s Turkish and Greek populations have also been unable come to terms with each other ever since the 1974 Turkish intervention which aimed to prevent a change in its political status quo following the Greek Cypriot military coup against the internationally-recognised government of the Republic of Cyprus.

With the relaunched Cyprus talks in 2015, there was hope that the newly discovered gas reserves would inspire Turkish and Greek Cypriots to address the island’s political deadlock.

But that did not happen. Following the failed UN-sponsored talks, Turkey announced that Ankara would retaliate against unilateral Cypriot Greek exploration in the region, starting its own exploration efforts in April 2017.

“Our aim is to open two drilling wells on average a year with the Fatih vessel,”said Turkish Energy Minister Fatih Donmezyesterday regarding Ankara’s exploration efforts.

What is at stake in the eastern Mediterranean?

Until recently, the eastern Mediterranean states have depended on gas imports to meet their energy needs. But with the new offshore gas discoveries, the prospect of self-sustainability became achievable for the littoral states, with the option to even export their gas to international markets, primarily to Europe.

In total, the Levant Basin has gas reserves amounting to 3.45 trillion cubic metres as well as 1.7 billion barrels of oil, according Zeliha Khashman, a professor of international relations at Near Eastern University in the Turkish Republic of North Cyprus (TRNC).

“These newly discovered natural gas resources have been assessed to be huge resources for the region and also for Europe,” Khashman told TRT World.

Two Israeli gas fields, Leviathan and Tamar, hold large swathes of gas reserves, estimated to contain at least 900 billion cubic metres in total, recent findings have demonstrated. The Leviathan gas field alone could ensure Israel meets its gas needs for the next 40 years according to estimates.

Compared to Israel and Egypt, the island of Cyprus has more modest gas reserves of 127 billion cubic metres in the newly discovered Greek Cypriot-administered Aphrodite field, in the eastern Mediterranean. However, the reserves will be enough for the island to meet its energy needs for more than 100 years, according to experts.

What are the main disputes over the gas fields?

The littoral states in the eastern Mediterranean need to find common ground to share the gas reserves among themselves. In order to do that, they need to find a way to designate their own respective Exclusive Economic Zones (EEZ).

But the determination of EEZ is not an easy task in the eastern Mediterranean due to the unresolved Cyprus issue.

On the divided island, the two states refuse to recognise each other. In 1983, after an almost decade-long deadlock, Turkish Cypriots declared their own state, TRNC, which has only been recognised by Turkey to date.

Since 2003, the Greek Cypriot administration has signed agreements with Egypt, Lebanon and Israel to determine their respective EEZs in the eastern Mediterranean, said Khashman. Turkey does not recognise these agreements because Ankara believes the Greek-led administration does not represent all the inhabitants of the island.

“The main reason of disagreement among the states, which have a coast in the eastern Mediterranean, is unclarified status of their respective EEZs,” Khashman observed.

“There is no question that the continuation of the Cyprus issue is making the existing disagreement worse.”

Turkey has demanded a stop to Greek Cypriot gas exploration efforts until the Cyprus issue has been resolved, Khashman explained.

When it was clear that the issue could not be resolved in the foreseeable future, then, “Ankara asked from the Greek Cypriot administration to establish a joint committee to determine how the gas fields could be managed by the respective states.”

Until now, the Greek Cypriot administration has refused Turkey’s demands, “stating that exploration efforts are part of its sovereign rights,” Khashman added.

Why Turkey opposes the unilateral actions of Greek Cyprus?

Turkey has been opposing Greek Cypriot gas exploration in the eastern Mediterranean on two main political points, based on its national continental shelf rights in the region and the country’s protection of Turkish Cypriot rights concerning their stakeholdership in all of the island’s natural sources.

First, Turkey argues that most of the Greek Cypriot exploration efforts in the respective region are problematic, violating the country’s continental shelf rights along its Mediterranean coast.

After the Greek Cypriot administration declared an auction this month for international companies to carry out offshore hydrocarbon exploration in a region designated as “Licence Area Number 7”, the Turkish foreign ministry denounced the effort in strong terms.

“An important segment of so-called ‘License Area Number 7’ remains within the outer limits of Turkey's continental shelf in the Eastern Mediterranean, as has been registered with the UN,” the statement said.

Second, Ankara, the longtime defender of the national and territorial rights of Turkish Cypriots against a Greek-dominated state apparatus, views Greek Cypriot gas exploration efforts - conducted without any consultations with Turkish Cypriots, “co-owners” of the island, or the Turkish government - as unacceptable.

Turkey has been one of the three guarantor states, along with Britain and Greece, since the establishment of the Republic of Cyprus in 1960.

After a Greek Cypriot coup, aiming to unite the island with Greece in July 1974, Turkey, as a guarantor state, intervened in the island to prevent a change in the political status of the Republic of Cyprus.

Despite international efforts, the Cyprus issue could not be settled between Turkish Cypriots and Greek Cypriots. Before the most recent 2015 talks, the last major effort to break the deadlock and to settle the Cyprus dispute was the Annan plan initiated by late Kofi Annan, the former UN general secretary, to facilitate the entry of a united Cyprus to the EU in 2004.

The initiative also failed. While Turkish Cypriots overwhelmingly voted for the plan, a large majority of Greek Cypriots rejected it. Despite their rejection, the Greek Cypriot administration was still able to enter the EU despite strong Turkish protests. Turkey sees it as a violation of both Turkish Cypriot rights and Turkey’s good intentions.

Ankara sees the latest Greek Cypriot gas exploration actions in the eastern Mediterranean as another violation of both the “inalienable rights” of Turkish Cypriots and its good intentions.

“Indeed, the Greek Cypriot side, by acting this way, once more demonstrates that they have not given up their position, which caused the closure of the Cyprus Conference in July 2017 (which refers to the failure of 2015 talks) without any results, and disregards the fact that the Turkish Cypriot side has political equality and co-ownership of the island,” the Turkish foreign ministry statement said earlier this month. 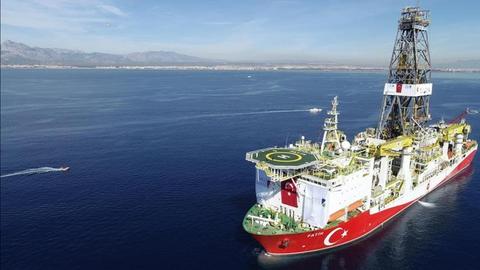 A quick look into the Eastern Mediterranean gas conundrum