Turkey asks Russia 'not to stand in way' of Syria retaliation

Turkey warned Russia not to get involved as it retaliated against the Syrian regime for killing five of its soldiers in Idlib, northwest Syria on Monday. Ankara said it eliminated 76 regime soldiers in response.

"I want to especially tell the Russian authorities that our interlocutor here is not you but the (Syrian) regime, and do not stand in our way," President Recep Tayyip Erdogan told reporters ahead of a trip to Kiev.

Erdogan said Turkey would continue to retaliate against attacks on its forces.

Later in Kiev, Erdogan said he hoped "that everyone will assume their obligations under the Astana and Sochi agreements."

"It cannot continue like this and a response has been given," Erdogan said. "We will make them pay the necessary price and will continue to do so."

At least five Turkish soldiers and three civilians were killed while seven others wounded in shelling by Syrian regime forces in Idlib on Monday, the Turkish defence ministry said.

"In this context, we continue our work and take additional measures to ensure the continuity of the ceasefires, to ensure the security of our troops, and to prevent migration and end the humanitarian drama in which people live in difficult terrain and climate conditions," Turkey's Defence Minister Hulusi Akar said.

Russia, responding on Monday, said the Turkish military came under fire from Syrian forces because Moscow had not been warned about Turkey's operations in Syria's northwest Idlib region, the Tass news agency cited Russia's Defence Ministry as saying.

Turkish air force planes did not violate Syria's border and no attacks on Syrian regime troops were recorded, the ministry added.

The Turkish defence ministry said the Syrian regime forces had also been notified about the positions of the Turkish forces beforehand.

Earlier Erdogan said "some 40 positions have been targeted in an ongoing operation," adding between 30 to 35 regime troops were killed in the operation.

He said Turkey was shelling positions in Idlib identified by its National Intelligence Organisation with howitzers and F-16 fighter jets.

He underlined that Turkey's target is not Russia but the Syrian regime.

Meanwhile, air strikes by the Russia-backed regime killed 14 civilians on Sunday in the last major opposition bastion of Idlib, a war monitor said.

Moscow-backed regime forces have upped their deadly bombardment of the opposition and rebel-dominated region in recent weeks, chipping at its southern edge and causing tens of thousands to flee their homes.

Eight of those killed on Sunday died in a regime barrel bomb attack in the town of Sarmeen, seven from the same family, the Syrian Observatory for Human Rights said.

Rescue workers pulled the bodies of a nine-year-old girl and a 13-year-old boy from the debris of a two-storey building, an AFP correspondent in the town said.

"It's a terrible disaster," he said.

Abu Fida said he and his family had fled bombardment on Sarmeen on Thursday, with just the clothes on their back.

They returned on Saturday night to collect their belongings, deciding to spend one last night at home before leaving for good.

"I wanted to get my family out this morning but my wife told me to go to work. So I sent them a driver with a car to transport their things," but then aircraft hit the house, he told AFP.

His wife was inside the house when it was struck, but he survived with three other children.

In the rest of Idlib on Sunday, Russian and regime air strikes killed another six civilians, the Observatory said.

The Britain-based monitor says it relies on sources inside Syria and determines who carries out air strikes according to flight patterns, as well as the aircraft and ammunition involved.

Nine years into the war, the Damascus regime is back in control of around 70 percent of the country, but the northwestern region of Idlib remains beyond its reach.

In recent months, Assad's forces have pressed northwards along the M5 highway that connects the capital Damascus to second city Aleppo in the north, crossing Idlib.

Last week regime forces retook from rebels the key town of Maarat al Numan along the highway and are now just several kilometres from the abandoned town of Saraqeb.

On Monday, at least nine civilians were killed in an air strike in the village of Kafr Naha, in the western countryside of the northern province of Aleppo. Similar raids in Aleppo a day earlier had killed 14 civilians, according to the Observatory.

Monday's casualties were all displaced people who died when a missile hit their car, the Observatory said, without specifying the origin of the strike.

They died leaving a flashpoint region in Aleppo province, located in the Idlib region's eastern flank.

A Turkish-Russian deal in 2018 saw Turkish troops deploy at observation posts around Idlib, but the agreement has failed to stem repeated regime military offensives.

On Sunday morning, an AFP correspondent and the Observatory said a Turkish military convoy of hundreds of vehicles entered northern Syria, deploying in Idlib and neighbouring Aleppo province.

Increased violence since early December has forced around 388,000 people to escape their homes in northwestern Syria, the United Nations says.

The Observatory says that more than 260 civilians have been killed.

Half of the Idlib region's residents have been displaced throughout the war, with many living in precarious shelters in the countryside along the Turkish border.

Ankara – which already hosts more than 3.5 million Syrian refugees on its soil – fears the latest fighting will lead to another mass influx.

On Sunday, hundreds of Syrian men, women, and children marched towards the frontier demanding to be allowed through in a symbolic protest, an AFP correspondent said.

Near the Syrian border town of Harem, women lugged bags and men carried small children towards the razor-wired wall blocking the way to Turkey, he said.

"From Idlib to Berlin," read one banner, referring to the German capital many Syrians dream of reaching as they escape the war.

Among the demonstrators, Mohammed said he was looking to a better alternative for his family of nine after fleeing his hometown.

"Our goal is to go and live in a safe country – Turkey or Europe," he told AFP. "Here it's no longer safe."

Syria's civil war has killed more than 400,000 people since it started in 2011 with the brutal repression of anti-regime protests. 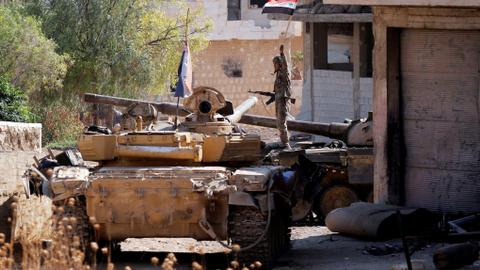