Russia largely stood aside as Turkey and Azerbaijan observed if Armenia would turn a page after decades of regional isolation.

It's not often that political leaders can make a political comeback after losing a war and facing a military coup. But that's precisely what Armenia's incumbent Prime Minister Nikol Pashinyan has done, winning comfortably in the country's parliamentary elections held on June 20 with 54 percent of the vote.

Pashinyan, a seemingly pro-Western politician, was a leader whose political future hung in the balance only months ago. He faced a humiliating defeat in the occupied Karabakh region of Azerbaijan, a region that Armenia had occupied for more than 30 years.

The conflict alone resulted in more than 4,000 dead Armenian soldiers, thousands of casualties and more than 100,000 displaced people.

Months of mass protests following the war and a failed military coup in late February of this year seemed to mark a turning point for the embattled leader.

Fast forward, however, Pashinyan seemed to have made a comfortable comeback winning 71 seats in parliament, giving him a two-thirds majority in the 107 seat assembly.

What does Russia think?

Russia, a significant source of influence in the country, has been largely silent.

Kocharyan would have perhaps been a more natural choice when compared to Pashinyan, a former journalist turned activist who led street protests that eventually propelled him to power and ultimately surrounded himself with other like-minded liberals.

But Russia, while not natural bedfellows with Pashinyan as evidenced by its aloofness during the Karabakh war, has forged a working, if not a warm, relationship with the incumbent leader.

When Pashinyan came to power on the back of the so-called Velvet Revolution in 2018, Russian annoyance that the country would fall under Western influence played a part in Moscow standing aside during its conflict with Azerbaijan.

The war in 2020 and the resulting ceasefire spearheaded by Russia with Turkish backing underlined to Pashinyan and Yerevan's political class that Russia remains an important guarantor for the landlocked country.

Following the war, Russia deepened its presence within Armenia's politics by deploying 2,000 soldiers who would ensure that the ceasefire would be upheld.

The Russian businessman Yevgeny Prigozhin who also has close ties to Putin, cryptically suggested Pashinyan's loss in the Karabakh war not only "cheated the Armenians" but also showed that even with US backing, Pashinyan "cannot stand up" and protect the country, and that Armenia's only natural ally, Russia, could step in where the US failed.

Pashinyan has seemingly learnt his lesson. In May, the Armenian Prime Minister sought additional Russian military support amid a renewed rise in tensions between Armenia and Azerbaijan.

In a bid to shore up his pro-Russian credentials, Pashinyan even sent a small contingent of Armenian soldiers to Syria in 2019.

Pashinyan victory also gives Russia an important win. A democratically elected leader who is willing to remain within Russia's sphere of influence and not cause another geopolitical conflict with the West as Ukraine and Belarus have.

Pashinyan's main pro-Russian challenger in the elections, Kocharyan, has suggested throughout his campaign that he could get a better deal for Armenia following the incumbent's capitulation.

The spectre of another war in the Caucasus that could damage Russia's relationship with the new US administration and its other regional ally Turkey and Azerbaijan was perhaps not very enticing for Moscow.

One Russian insider quipped during the latest conflict: "why should Russia support Armenian military adventures in foreign, Azeri lands?"

For Moscow, Armenia's foreign policy orientation is the most important benchmark.

In the runup to the election, Sergey Markedonov, a senior analyst at the Moscow State Institute of International Relations, stated, "all key characters in Armenian politics are all in favour of building up cooperation with Russia."

"Pashinyan's former opposition, as well as his revolutionary spirit, are the prime minister's weak points. But, having entered power, he did nothing to break or correct the Armenian foreign policy traditionalism," added Markedonov.

Erdogan announced that a regional platform with six countries comprising Turkey, Russia, Iran, Azerbaijan, Georgia, and Armenia would be established to increase integration in the region.

He said: "We are willing to make all kinds of sacrifices. Mr Putin as well. With the steps to be taken in this regard, the region will become a peace zone."

"We hope Armenia will grasp this hand extended in solidarity and take an opportunity to shape a common future together," while adding that Ankara stands ready to back Baku should tensions flare up following the elections.

Pashinyan victory at the polls gives the leader a chance to entrench the ceasefire agreement he signed, albeit after taking his country to war. It indicates that Armenia's population doesn't seek a renewed conflict and may even want their economically embattled country to open up to regional countries. Armenia and Pashinyan are at a historic crossroad. 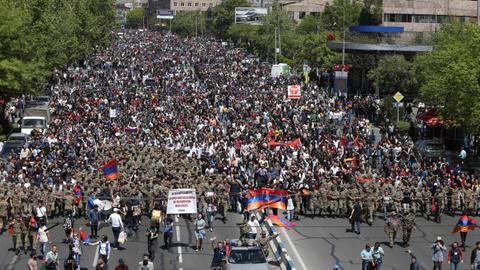