A suicide bomber has targeted a minibus full of delegates involved in Somalia's parliamentary elections killing at least six people in Mogadishu.

The blast occurred early on Thursday while the vehicle was passing a busy junction on a road heading to the president's office in the capital of the East African nation, the ambulance service said.

Abdikadir Abdirahman, director of Mogadishu's Aamin Ambulance Services, said its personnel carried six bodies from the scene. It was not immediately clear who the casualties were.

A delegate on the bus said the passengers were unharmed.

"We were in the bus passing the junction and I could see someone running towards the bus and police shouting at him 'stop' at gunpoint. Then we heard two gunshots and a blast," Saado Abdillahi, one of the delegates told Reuters.

"We had passed already but I understand civilians were victims."

Al Qaeda-linked Al Shabab, which aims to topple the central government and impose its own severe interpretation of Islamic law, claimed responsibility for the attack, saying it killed six delegates and five police officers.

"A Mujaheed suicide bomber conducted an operation against a convoy of the apostate government. The target was the delegates selecting lawmakers," Abdiasis Abu Musab, al Shabab's military operations spokesperson said.

Somalia's elections for lawmakers began on November 1 and were initially supposed to end on December 24, but are currently due to be completed on February 25.

The attack on delegates may present an additional challenge to the election.

Al Shabab frequently carries out bombings and gun assaults in Mogadishu and elsewhere in Somalia.

It also carries out attacks against African Union peacekeeping troops, and in neighbouring Kenya, in retaliation of the presence of its soldiers in the peacekeeping mission. 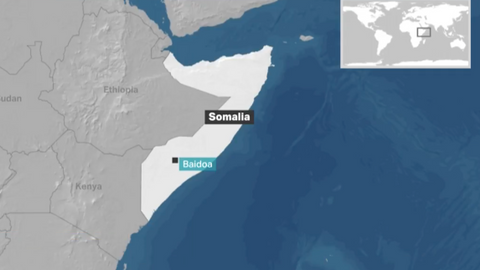 Death toll rises to 20 after suicide bombings in southern Somalia