President Salva Kiir orders military officers loyal to his Vice President Riek Machar to be officially integrated into a unified command of the army, a central pillar of the 2018 peace deal.

South Sudan's government has announced the creation of a unified armed forces command, implementing a key provision of the 2018 peace deal that observers hope will ease the country's recovery from years of war.

The world's newest nation has struggled to draw a line under a five-year civil war between forces loyal to President Salva Kiir and his rival, Vice President Riek Machar, that left nearly 400,000 dead before the pair agreed to a truce in 2018.

Since then, frequent explosions of violence have raised fears of a return to full-blown conflict, as the two sides remained deadlocked over major issues including the unification of their forces –– a key provision of the 2018 pact.

But earlier this month, the duo sealed a deal on the division of top positions within the unified structure, agreeing to a 60-40 distribution in favour of Kiir's side of leadership posts in the army, police and national security forces.

Late on Tuesday, the national broadcaster SSBC read out a series of presidential decrees announcing Kiir's decision to replace senior officials in the military, police and security services with members of Machar's Sudan People's Liberation Movement in Opposition.

The decrees "come into force on the date (April 12, 2022) of its signature by the President," the broadcaster said.

Under the terms of the deal signed on April 3, the graduation of the unified forces should be completed within two months.

From crisis to crisis

Despite the agreement, violence continues to roil the country, with fresh clashes on Friday between pro-Kiir and pro-Machar forces prompting thousands to flee their homes in the oil-rich Unity state.

Since achieving its independence from Sudan in 2011, the young nation has lurched from crisis to crisis, battling flooding, hunger, inter-ethnic violence and political instability.

Last month, the UN Security Council voted to prolong its peacekeeping mission in South Sudan for another year.

The UN has repeatedly criticised South Sudan's leadership for its role in stoking violence and has accused the government of rights violations amounting to war crimes over deadly attacks in the country's southwest last year. 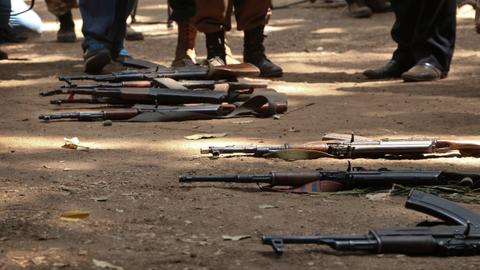