Forces linked to Russia operating in the Central African Republic have executed, tortured, and beaten civilians since 2019, according to Human Rights Watch.

Human Rights Watch has said there is "compelling evidence" that Russian paramilitary troops have been committing serious rights abuses and killing civilians in the Central African Republic.

"Forces in the Central African Republic, whom witnesses identified as Russian, appear to have summarily executed, tortured, and beaten civilians since 2019," Human Rights Watch said on Tuesday.

"Several Western governments, and United Nations experts and special rapporteurs have found evidence that the forces linked to Russia operating in the Central African Republic include a significant number of members of the Wagner Group, a Russian private military security contractor with apparent links to the Russian government," it added.

The UN, NGOs and CAR's former colonial ruler France accuse both the army and rebels of committing crimes against civilians.

"The Central African government has every right to request international security assistance, but it can’t allow foreign forces to kill and otherwise abuse civilians with impunity," HRW's Ida Sawyer said.

"To demonstrate its respect for the rule of law, and to put an end to these abuses, the government should immediately investigate and prosecute all forces, including Russia-linked forces, responsible for murder, unlawful detention, and torture," Sawyer said.

Cases of detention and torture

The New York-based group also spoke of arbitrary detentions, tortures and summary killings of men randomly arrested in the street in the central town of Alindao in June last year.

HRW said it also "documented cases of detention and torture by Russia-linked forces in Bambari in 2019".

It said it had written to the CAR and Russian governments but received no reply.

A civil war in the CAR that began in 2013, pitting numerous militias against a state on the verge of collapse, had eased considerably in recent years.

But about a year ago, fighting resumed abruptly when rebels launched an offensive to overthrow President Faustin Archange Touadera.

After the president called on Moscow for help, hundreds of Russian paramilitary forces helped push back the rebels, who still hold sway over swathes of the country.

The private military contractors are often described as belonging to the "Wagner group" – a Russian entity with no known legal status.

Last month, the UN High Commissioner for Human Rights, Michelle Bachelet, denounced "serious human rights violations" in the Central African Republic, including killings and sexual violence against civilians, committed by rebel groups but also by the military and their Russian allies. 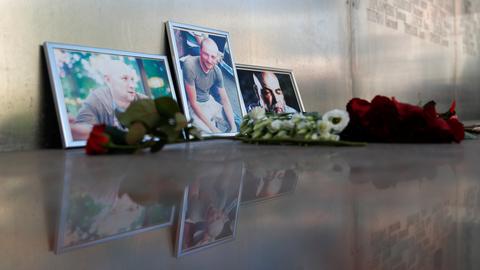