Aid has been reaching the thousands of people left homeless and struggling after an earthquake that killed at least 81 people on an Indonesian island where rescuers intensified their work to find those buried in the rubble.

More rescuers and volunteers were deployed in the hardest-hit city of Mamuju and the neighbouring district of Majene on Sulawesi island, where the magnitude 6.2 quake struck last week, said Raditya Jati, the National Disaster Mitigation Agency’s spokesperson, on Monday.

He said a total of 70 people died in Mamuju and 11 in Majene, and about 27,850 survivors were moved to shelters.

Nearly 800 people were injured, with more than half of them still receiving treatment for serious injuries.

Water, which has been in short supply, as well as food and medical supplies, were being distributed from trucks. The military said it sent five planes carrying rescue personnel, food, medicine, blankets, field tents, and water tankers.

Volunteers and rescue personnel erected more temporary shelters for those left homeless in Mamuju and Majene.

"This is the only hospital operating in the city. Many need surgery but we have limited resources and medicine."

The open-air triage centre was desperately short of staff, and those on hand worked frantically despite the risk of contracting coronavirus.

The hospital was scrambling to open up more rooms for surgery and erect additional tents outside to treat the injured, said Nurwardi, who like many Indonesians goes by one name.

But fears that another quake could bring down the building were adding to the challenges.

"Many patients do not want to be treated inside the hospital because they're worried about another quake," Nurwardi said.

"Well, it's not only them, the medics are... scared of being inside the building too."

It was still unclear how many people – dead or alive – could still be under mountains of debris, as rescuers rushed to find survivors more than three days after the disaster.

Friday's tremor triggered panic among residents of Sulawesi island, which was hit by a 2018 quake-tsunami disaster that killed thousands.

At least 18 people had been pulled out of the rubble alive, including a pair of young sisters, according to official data.

Police began using sniffer dogs to help in the search at a badly damaged hospital, as body bags were filled with recovered corpses.

"There are probably some people still trapped under the rubble," search and rescue agency spokesman Yusuf Latif said Monday.

Meanwhile, about 19,000 people left homeless by the quake took refuge at dozens of makeshift shelters – many little more than tarpaulin-covered tents filled with whole families.

They said they were running low on food, blankets and other aid, as emergency supplies were rushed to the hard-hit region.

Many survivors were unable to return to their destroyed homes, or were too scared to go back, fearing a tsunami sparked by aftershocks, common after strong earthquakes.

Fearing an outbreak of coronavirus in the crowded camps, authorities were trying to separate high- and low-risk groups.

Indonesia, a Southeast Asian archipelago of nearly 270 million, has been hit by a series of natural disasters this week, including deadly landslides, flooding and a pair of volcanic eruptions.

The country experiences frequent seismic and volcanic activity due to its position on the Pacific "Ring of Fire", where tectonic plates collide.

On December 26, 2004, a massive 9.1-magnitude earthquake struck off the coast of Sumatra, triggering a tsunami that killed 220,000 throughout the region, including 170,000 in Indonesia – among the worst recorded disasters in history. 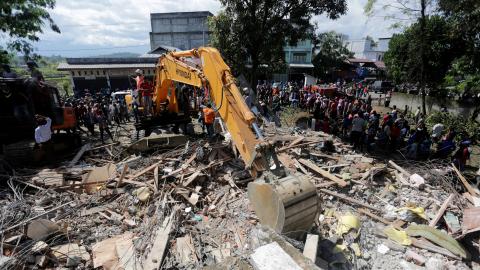 Death toll rises to 102 from earthquake in Indonesia's Aceh 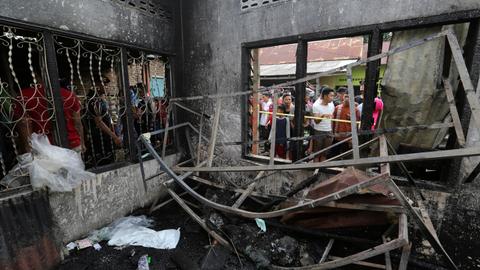