Officials and residents of areas that bore the brunt of Typhoon Rai pleaded for food, water and shelter as thousands of military, police and coast guard personnel deployed to deliver aid to survivors.

Troops have raced to deliver food and water to typhoon-ravaged islands of the Philippines as charities appealed for aid to help hundreds of thousands left homeless by the deadly storm.

Thousands of military, police and coast guard personnel have been deployed on Monday to deliver food, drinking water and medical supplies to survivors, who have been struggling to find basic necessities.

Heavy machinery – including backhoes and front-end loaders – also have been sent to clear roads.

Meanwhile, officials and residents of areas that bore the brunt of Typhoon Rai pleaded for food, water, and shelter.

"Our food supply is running low. Maybe, in a few days, we will totally run out," said Fely Pedrablanca mayor of Tubajon town on Dinagat Island.

In the province of Southern Leyte, evacuation centres were also destroyed, said Roger Mercado, acting chief of the public works agency, as he appealed for tents and construction material.

Damage to infrastructure in Southern Leyte, where residents were also in desperate need of food and water, could reach 3 billion pesos ($60.14 million), Mercado told DZMM radio.

The Red Cross is also flying relief to Siargao and Bohol islands – popular tourist destinations that had been struggling to recover after Covid-19 restrictions wiped out visitor numbers.

"The emergency appeal by IFRC helps us to act swiftly and do all we can to help people and families get back on their feet," said Alberto Bocanegra, head of the International Federation of Red Cross and Red Crescent Societies in the Philippines.

The organisation has appealed for $22 million to fund urgent relief and recovery efforts.

The UK has pledged around $1 million to the IFRC effort.

Other non-government organisations are also appealing for donations.

At least 375 people were killed and hundreds injured when Typhoon Rai pummelled the southern and central regions of the archipelago, wiping out wooden houses, uprooting trees and knocking out power across entire islands.

The United Nations reported "utter devastation" in the areas worst affected by Rai, which slammed into the country on Thursday as a super typhoon.

"Never in my entire life have I encountered such a typhoon," said Catholic Bishop Antonieto Cabajog in Surigao, on the northern tip of Mindanao island.

"To say 'super' is an understatement," he told a Catholic church-run news agency.

More than 400,000 people were sheltering in evacuation centres or with relatives, the national disaster agency said after their homes were damaged or destroyed by the strongest typhoon to hit the country this year.

One of the hardest-hit islands was Bohol – known for its beaches, "Chocolate Hills" and tiny tarsier primates – where at least 94 people have died, provincial Governor Arthur Yap said on Facebook.

A state of calamity has been declared on the island.

There has also been widespread destruction on Siargao, Dinagat and Mindanao islands, which bore the brunt of the storm when it hit, packing winds of 195 kilometres (120 miles) per hour.

Scientists have long warned that typhoons are becoming more powerful and strengthening more rapidly as the world becomes warmer because of human-driven climate change.

The Philippines – ranked among the most vulnerable nations to the impacts of climate change – is hit by an average of 20 storms every year, which typically wipe out harvests, homes and infrastructure in already impoverished areas.

In 2013, Typhoon Haiyan was the strongest storm ever to have made landfall, leaving more than 7,300 people dead or missing. 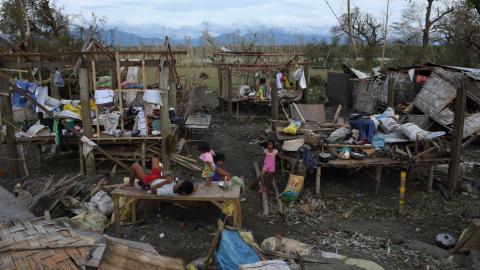