Schools, telephone lines to reopen in Kashmir after lockdown

Telephone and internet links were cut and public assembly banned in Kashmir just before New Delhi removed the decades-old autonomy the Muslim majority territory enjoyed under the Indian constitution.

Authorities began restoring some telephone lines in Indian Kashmir on Friday night, the top state official said, as heavy security prevented some protests in the region’s main city of Srinagar from getting out of control.

Telephone and internet links were cut and public assembly banned in Kashmir just before New Delhi removed the decades-old autonomy the Muslim majority territory enjoyed under the Indian constitution. The measures were aimed at preventing protests.

“Over the weekend, you’ll have most of these lines functional,” he said, responding to a question about landlines.

He did not say when internet and mobile phone services would be restored, adding that militant groups could use the latter to organise “terror actions”.

UN Security Council members believe India and Pakistan should refrain from taking unilateral action over the disputed region of Kashmir, China's UN envoy said on Friday after the council met on the issue for the first time in decades.

The 15-member council met behind closed doors at the request of China and Pakistan after India removed the decades-old autonomy the Muslim-majority territory of Jammu and Kashmir enjoyed under the Indian constitution.

While the council did not agree on a statement, China's UN Ambassador Zhang Jun summed up the discussions, describing serious concern over the situation.

"They are also concerned about the human rights situation there and also it’s the general view of members that parties concerned should refrain from taking any unilateral action that might further aggravate the tension there since the tension is already very tense and very dangerous," he said.

India's UN Ambassador Syed Akbaruddin accused Zhang of trying to pass off his remarks as "the will of the international community."

He said India’s decision was an internal matter.

"If there are issues, they will be discussed, they will be addressed by our courts; we don't need international busybodies to try and tell us how to run our lives. We are a billion-plus people," Akbaruddin told reporters.

Zhang said "it's obvious that the constitutional amendment by India has changed the status quo in Kashmir, causing tensions in the region” and called for the issue to be resolved through peaceful means according to the UN Charter, Security Council resolutions and bilateral agreements.

Pakistan's UN Ambassador Maleeha Lodhi described her country's push for Friday's Security Council meeting as "the first and not the last step."

She said it was the first time in more than 50 years that the council had taken up the issue.

"The people of Jammu and Kashmir may be locked up ... but their voices were heard today at the United Nations."

Protests erupted in Srinagar city of India-administered Kashmir on Friday as people took to the streets in large numbers against New Delhi’s decision of revoking its special status.

Protesters, including children and elderly women, were seen sloganeering for "Azadi" (freedom). They carried placards and flags of Pakistan-administered Kashmir.

Earlier, Indian authorities imposed strict restrictions ahead of Friday prayers to prevent any protests, though the government in New Delhi said curbs on movement and communications will be lifted in the next few days.

New Delhi's decision to revoke laws key to the accession treaty of India's only Muslim-majority region, along with a communications blackout and curbs on movement, had caused outrage in some Muslim countries as well as fury in Pakistan, which cut trade and transport links and expelled India's envoy in retaliation.

Security forces were deployed outside mosques across Srinagar, while police vans fitted with speakers asked people not to venture out, according to two Reuters witnesses.

In some parts of the city, posters appeared calling for protests and asking preachers in mosques to talk about the current situation in Kashmir valley.

"People must try to occupy the streets defying curfew," one poster read.

“Over the weekend, you’ll have most of these lines functional,” he said, responding to a question about landlines.

He did not say when internet and mobile phone services would be restored, adding that militant groups could use the latter to organise “terror actions”.

Earlier on Thursday, thousands of people, many waving Pakistani and Kashmiri flags, protested outside the Indian High Commission in London to express support for the people of India-administered Kashmir.

In London, protesters carried banners saying "Kashmir is Burning", "Free Kashmir" and "Modi: Make Tea Not War", according to a Reuters reporter.

A small counter-demonstration was kept apart from the main protest by the police.

Four people were arrested for affray, obstruction of police and possession of an offensive weapon, police said.

"One person was injured during the demonstrations," they said.

A Reuters photograph showed police carrying away a large curved knife from the protest.

Many of the London protesters had come to the capital from other English cities on specially chartered buses.

"We want to show our solidarity with our Kashmiri brothers," said Amin Tahir, a British pensioner of Kashmiri origin who came from Birmingham on one of the coaches.

"Since 1947 Kashmir has been struggling to be free from India. Now Modi has changed the law by force to stop Kashmir’s autonomy," he said.

India's Prime Minister Modi said the decision to revoke Kashmir's constitutional autonomy and downgrade it from statehood to a territory would free it from "terrorism".

Modi delivered an Independence Day speech on Thursday that also spotlighted his decision to remove the special rights of Kashmir among the bold moves of his second term.

My brother, who's in 6th grade, got this homework today: write a letter to PM M*di in hindi, thanking him for removing Article 370 in J&K.

This is propaganda. And I'm enraged.

Pakistan's Prime Minister Imran Khan has likened the situation in India-administered Kashmir to Nazi ideology and the "Srebenica massacre."

Expecting a backlash, New Delhi snapped telecommunications and imposed a curfew in India-administered Kashmir on August 4, a day before its surprise presidential decree to strip the region of its autonomous status.

Tens of thousands of troop reinforcements were deployed to the disputed region's main city of Srinagar and other towns and villages, turning the picturesque city into a deserted warren of barbed wire and barricades.

The curfew was later lifted in the Hindu-majority Jammu district of the disputed valley while it remains in place in the Muslim-dominated areas.

The reinforcement was sent to beef up the strength of half a million Indian troops that have been stationed in the region for several decades.

The lockdown has not completely prevented protests, however.

Reminder that the Indian government is denying that a protest like this even took place yesterday in Kashmir.

At the end, a man yells to the crowd:

India and Pakistan gained independence in 1947 when British colonialists left the subcontinent.

The 1948 war had ended with the region divided between them, though both claim it entirely, and also resulted in the unfulfilled promise of a UN-sponsored referendum on the future of the disputed region.

The Security Council has adopted several resolutions in 1948 and in the 1950s on the dispute between India and Pakistan over the region, including one which says a plebiscite should be held to determine the future of the mostly Muslim Kashmir.

Some 70,000 people have died in clashes between militants and civilian protesters and Indian security forces since 1989. Most Kashmiris want either independence or a merger with Pakistan.

Kashmiris fear India's move to put the region under greater New Delhi control and allowing non-residents to buy property there will alter its demographics and cultural identity.

The UN Security Council is also due to meet behind closed-doors on Friday at the request of China and Pakistan to discuss New Delhi's decision to revoke the special status of Jammu and Kashmir, diplomats said.

Exchange of fire at LoC

Pakistan's military said on Friday that Indian troops fired across the Line of Control, which is the de facto border that divides the disputed Kashmir region, killing another soldier and bringing the death toll to six in less than 24 hours.

In response, he said, five Indian soldiers were killed and many others were injured. Indian forces bunkers were also damaged, he added.

Indian Army, however, denied the death toll issued by Pakistan, calling it “fictitious.” 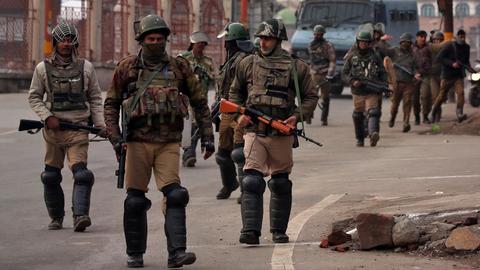