Three die after train crashes into tour bus in Thailand

Three Thais were killed on Sunday when a train crashed into a double-decker bus carrying holidaymakers as it was crossing the line, police said.

The bus was taking a group of workers from a nearby factory in Nakhon Pathom province west of Bangkok to the southern island of Koh Samui for a holiday trip, according to local police officer Thanachot Shinwongsa.

Tour bus hit by a train this morning in Nakhon Chaisi in Nakhon Pathom. Many injured #Thailand (Via @K5_Rescue) pic.twitter.com/IgOxLRIh0z

"Three have been reported dead, all Thais. The number of injuries is not yet confirmed," he told Agence France Presse.

"The scene was cleared and the train is back in service."

Video footage has been shared on Twitter, showing the bus slowly crossing the railway when a train ploughed into it at full speed, whipping the vehicle around.

There appeared to be no lights or other warning devices at the intersection, a common failing at many unregulated railway-road junctions in Thailand.

Other cars were seen driving over the tracks alongside the bus just seconds before the collision.

Thailand has the world's second most dangerous roads in terms of per capita deaths.

In January three people were killed and scores injured when a truck crashed into the side of a passenger train south of Bangkok. 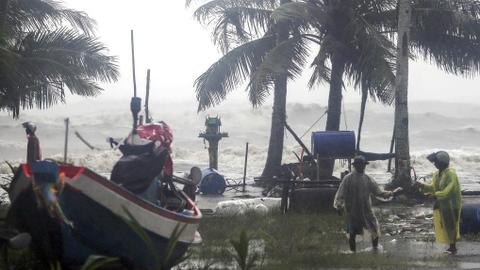