The UK government has announced businesses will receive fines if they do not carry out checks and show their supply chains are free from alleged forced labour following reports of human rights violations in China's Xinjiang Uighur Autonomous Region.

The United Nations estimated at least one million of the minority among others were held in an internment camp.

Raab said Britain wanted to make sure it was free from any products that had links with Xinjiang, where he cited widespread reports of forced labour and the forced sterilisation of Uighur women.

The abuses were "on an industrial scale," said Raab, in strongly worded comments.

"It is truly horrific barbarism we had hoped lost to another era, in practice today as we speak, in one of the leading members of the international community," he told parliament.

China's envoy to the UN warned Britain not to interfere in its affairs.

Not a concrete action

"The government should not hide behind tepid improvements to the Modern Slavery Act, and pretend this is meaningful action to end Uighur forced labour," said Chloe Cranston, business and human rights manager at Anti-Slavery International.

"Guidance is just guidance ... and the Modern Slavery Act is just a reporting requirement," she said on Twitter.

China's policies in the region, home to the Uighurs and other predominantly Muslim ethnic groups, have become a major point of division with Western nations.

"It is truly horrific barbarism we had hoped lost to another era, in practice today as we speak, in one of the leading members of the international community," Raab told Parliament.

"We have a moral duty to respond."

Chinese officials deny the accusations and tout what they say has been a successful effort to deradicalise the population and provide job training, saying the region hasn't had a terrorist attack in four years.

Britain's stance marks a further deterioration in its relationship with China just five years after London hailed the start a "golden era" in ties and President Xi Jinping was feted in a state visit to the capital which included a dinner hosted by Queen Elizabeth.

Since then, Britain has criticised China over Hong Kong and ordered the removal of Huawei equipment from its 5G network.

It would also bar from government contracts any companies which do not comply to procurement rules, and launch a Xinjiang-specific review of export controls.

"This package put together will help make sure that no British organisations, government or private sector, deliberately or inadvertently are profiting from, or contributing to, human rights violations against the Uighurs or other minorities in Xinjiang," he said.

It is not clear how many products connected to Xinjiang enter the supply chain in Britain.

READ MORE: Is China losing its pull with Europe?

...of the Holocaust Memorial, surely Magnitsky Sanctions should've been in this list. I happen to believe that @dominicraab wants this to happen and the reality is we need those now because the evidence is clear of #Xinjiang #Uyghur abuses...(2/2) pic.twitter.com/DTKIQYfgmi

After Britain finally left the European Union at the end of last year, Prime Minister Boris Johnson wants to forge an independent role for Britain in foreign affairs, and the move was touted as London leading the way.

But the government has so far resisted the calls of some in the ruling Conservative Party to introduce Magnitsky-style sanctions, with Raab saying he was keeping the possibility in reserve.

Magnitsky-style sanctions target individuals accused of committing human rights violations and are named after Sergei Magnitsky, a Russian lawyer who was arrested in 2008 after alleging that Russian officials were involved in large-scale fraud.

Some opposition lawmakers criticised the government for not going far enough and questioned what kind of impact the new measures would have.

Raab said Britain still wanted a positive and constructive relationship with China "but we won't sacrifice our values or our security." 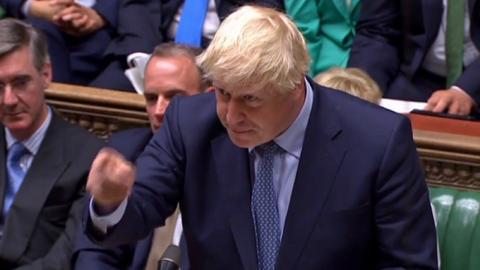